As plans for the Dillard Wetlands take shape, neighbors express concern over access to the public greenspace 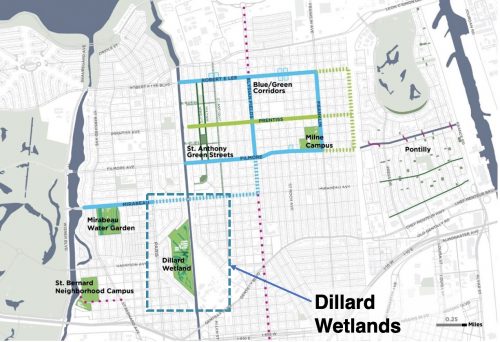 The 27-acre wooded area near the Dillard University campus is a rare patch of uncultivated land in a city that has, for centuries, grown around it. Its groves are thick with invasive species such as Chinese tallow and elm. The Dillard Wetlands project, part of the city’s Gentilly Resilience District, seeks to redevelop the woods to host more native species — and to allow public access to the woods and wetland.

That access to the planned nature trails and other recreational areas was a major topic at a virtual meeting Thursday (Nov. 4), presented by the Dillard Wetlands design and community engagement team to inform neighbors about developments in the park project and hear their feedback. Some community members expressed concern about the proposed fencing and entrances.

The Dillard Wetlands project grew out of a $141 million National Disaster Resilience Competition grant from the Department of Housing and Urban Development awarded to New Orleans in 2015. The Resilience District includes multiple projects designed to mitigate flooding, provide greenspace for residents, and increase native plantings and habitat for birds and pollinators.

The project designers have been looking at connecting the project site to residents who bike and use the city’s bike lanes to get around New Orleans, said Joel Tillery, the design technical lead for the project. The idea is to make the park  accessible to pedestrians and cyclists. The presentation reviewed a proposed bike lane on Pratt Drive that could lead cyclists to the entrance.

A large portion of the meeting outlined the plan for perimeter control for the park — fencing. Rodgerika Medrano, a project manager with the city, mentioned that at former meetings there had been complaints regarding disturbances at the site. However, attendees at the November meeting were less than enthused about the plan for a hard boundary encircling the park entrance.

Julia Lang, another resident attending the meeting, thanked the design team but also expressed her unease with the fencing plan, asking if she would have to go to Paris Avenue to access the park.

The planned entrances include a multimodal entrance, which would include car access from Pratt Drive; a cyclist- and pedestrian-only access point off of Rayne Drive; and a local pedestrian access point on the London Canal side of the site.

Nina Reins, the design team project manager, said the design team could reconsider the access points. Details such as gate design, the type of fence will be in place and the park’s operating hours are still under discussion.

For project updates and information, email resilience@nola.gov. Learn about this and other Gentilly Resilience District projects here. See here for the Dillard Wetlands webpage. 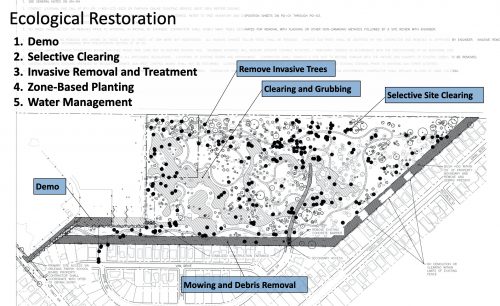