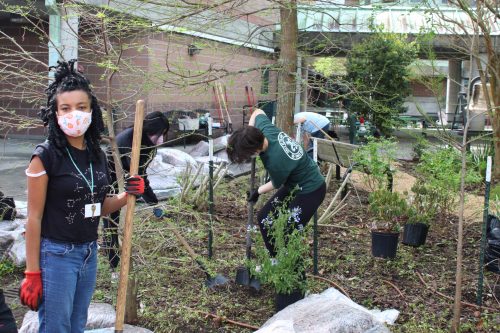 Benjamin Franklin High School students, along with Student Activities Coordinator John Parauka, gathered on campus on a Saturday in March to commemorate the founding of the New Orleans Public Schools 180 years ago.

The students decided it would be appropriate to mark the occasion by rededicating the school’s Diversity Garden, and they spent the afternoon weeding, mulching and planting new native plants.

“I loved working on the Diversity Garden with everyone!” said new ninth-grader Hanh Le, Class of 2024. “It was really fun to work together and make new friends. Socializing is really hard to do during COVID, so I’m definitely glad I got the opportunity to meet new people while helping with the garden.”

The Diversity Garden was donated by the Franklin Class of 1966 in honor of  the 14 courageous students of color who, by enrolling in Franklin in September 1963, made it the first racially integrated public high school in New Orleans.

Members of the Class of 1966 dedicated the garden, which is used by the science and art classes for class activities and experiments, in November 2013. Some of the 14 African-American students who first integrated Franklin attended the ceremony and recounted their experiences. A few have children and grandchildren who have also attended Franklin.

Everyone in attendance at the dedication ceremony in 2013 was thankful to be part of the first group to integrate a public high school in New Orleans and celebrated the fact that Franklin had evolved into one of the most diverse school communities in New Orleans.

Many of the students who worked in the garden on March 20 also have been involved in the school’s Diversity, Equity, and Inclusion initiatives over the past several years.

Parauka, who has worked with many students over his more than 25 years at Franklin, said he is always inspired by the positive attitudes of Franklin students and their willingness to help make a difference.

“The first time I came to campus, the Diversity Garden caught my eye, so when I heard Mr. Parauka needed volunteers to weed it, I thought, ‘Why not?’” said Lauren Ejiaga, Class of  ’23. “I was ready to help out. I also loved the experience, as I have a garden at home and know what weeding and tending to it is like, and Mr. Parauka was very welcoming and social and talked about little things to each individual as we worked, such as the garden’s history, the kinds of plants in it, and when he planted them. In all, it was a very invigorating and educational ‘get out the house’ time.” 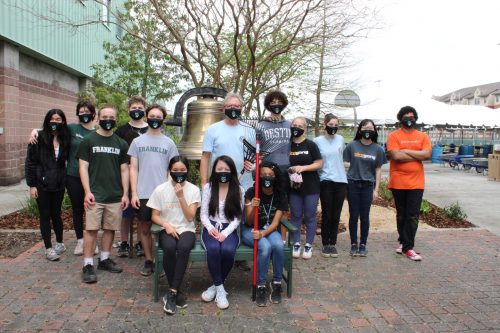