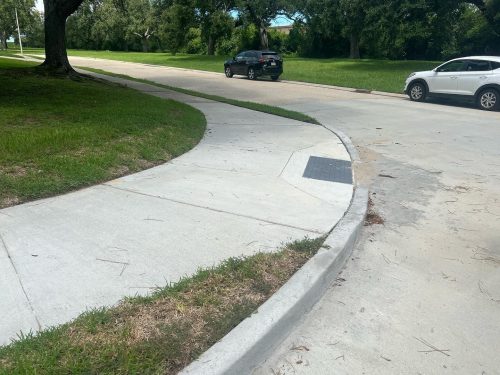 Officials set up a podium on a smoothly paved Oriole Street on Friday (Aug. 12) to mark the completion of an approximately seven-block roadway repair project in the Lake Oaks subdivision.
The joint infrastructure project includes complete reconstruction on Oriole and Killdeer streets, which included replacement of the underground water and sewerage lines as well as new curbs and pavement.
The Department of Public Works and the Sewerage & Water Board contractors began work in October 2020. The project cost $7 million.

Like most of the 200 or so roadwork projects across the city, it’s funded by through the $2.3 billion allocated to New Orleans to rebuild infrastructure after Hurricane Katrina, money that FEMA is set to cut off in October 2023. 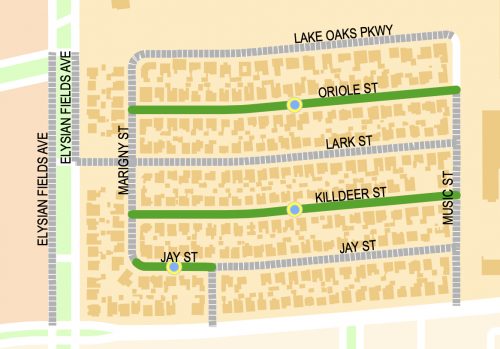 At the ribbon-cutting ceremony, Mayor LaToya Cantrell said the city is expecting additional federal funding from the Infrastructure Investment and Jobs Act and hopes to extend the FEMA funding beyond 2023.
“This city is on the world stage and on the national stage in investing in its infrastructure, and that’s something that we should be proud of,” Cantrell said on Friday. “We’re looked upon as the model in this country and throughout the world.”
Cantrell’s enthusiasm for roadwork is not shared by most New Orleanians. The everyday aggravation that comes from streets being interminably torn up was acknowledged by District D Councilman Eugene Green. He recalled a Halloween when children couldn’t trick-or-treat on some Lake Oaks streets because of roadwork hazards.
He then pointed to the new curbs and smooth street and noted that the repair work also improved drainage and flood control. “This is an example of the fact that sometimes it takes a little bit of pain to get to the pleasure of having a street that you can use to easily access your homes,” he said.
The long, slow slog to usable streets was also addressed by Deputy Chief Administrative Officer for Infrastructure Joseph Threat. “In this 300-year-old city. When we dig in with excavators into the streets, we get a lot of surprises.” Threat said. “We get wooden sewer pipes. We get streetcar rails. We get old, broken pipes — we fix one and another one breaks. We’ve got Belgium granite blocks that line whole streets. These are complex construction projects.”
The city has been putting projects out on the streets as quickly as possible while the funding is still available, he said. “Then we ran into all those problems I was telling you about when we started digging,” Threat said. “And it all came to screeching halt in some of these neighborhoods. And I apologize for that.”
Threat said he and others on the management team will be continually checking on all the projects across the city, so that each construction site is visited once every 30 days until it is finished.

For more information about current and upcoming roadwork, residents are encouraged to contact RoadWorkNOLA directly at roadwork@nola.gov or by phone at 504-658-ROAD (7623). 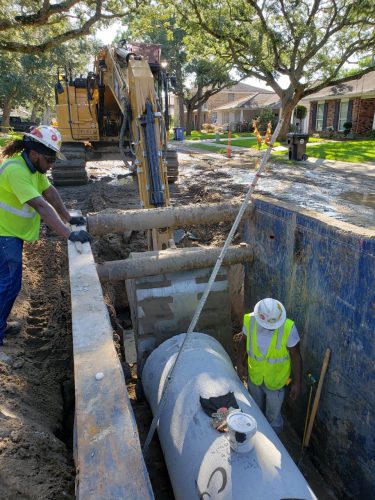