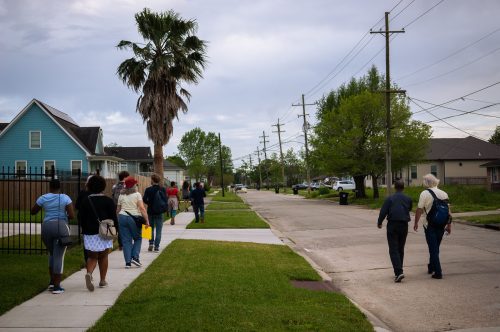 From the Mayor’s Office

The city’s Resilience Project Design Committee will host a virtual public meeting to review the 90 percent design for the  St. Anthony Green Streets Parks and Playgrounds and Public Art Projects at 6 p.m. today (July 14). The project is part of the HUD-funded Gentilly Resilience District.

The Resilience Project Design Committee — comprised of representatives from the Office of Resilience & Sustainability, the Department of Public Works, the Sewerage & Water Board of New Orleans, Parks & Parkways, Equity and Capital Projects — is charged with reviewing proposed resilience projects at key milestones during the design process to ensure both coordination and the long-term success of the project.

Through the design process and implementation of this project, the design team and city representatives hope to establish a new resilient standard for neighborhood scale streets and parks that can be replicated across the region. Construction is anticipated to begin in early 2022.

The Arts Council New Orleans has partnered with the city to create permanent Public Arts Projects at key locations adjacent to the London Avenue Canal in the GRD.

Public art will elevate public awareness and understanding of the canal and the important role that it plays in the city’s day-to-day functions, as well as to the possibilities that the canal holds for Gentilly and the city as a whole. Collectively, artist projects are intended to excite the public imagination, engage residents and raise awareness about New Orleans’ climate vulnerability, resilience efforts, flood mitigation and green infrastructure improvements while offering new amenities and recreation opportunities.

Questions about our Gentilly Resilience District projects should be directed to 504-658-ROAD (7623) or via e-mail to roadwork@nola.gov.

The $141 million HUD-funded Gentilly Resilience District is a combination of efforts across the Gentilly neighborhood that are designed to reduce flood risk, slow land subsidence, improve energy reliability, and encourage neighborhood revitalization. To learn more, visit: www.nola.gov/resilience or call 504-658-7623.