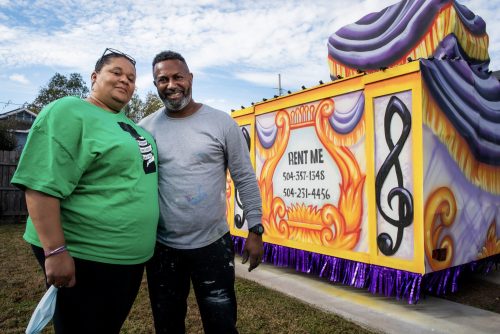 Rene and Inez Pierre take a photo in front of their first constructed float, built by hand for Pierre Parade Productions LLC. (Courtesy of Inez and Rene Pierre)

Gentilly-based couple Rene and Inez Pierre are the first Black-owned Mardi Gras float service providers in Louisiana. However, with New Orleans parades canceled this year due to COVID-19 restrictions, their company’s focus pivoted and found success in bringing the Mardi Gras spirit to neighborhoods around the city, with intricately designed and painted porch floats for the Krewe of House Floats.

The Pierre’s float service journey first began back in 2018, when Inez, whom Rene describes as the “brains” behind their enterprise, and he the artist, encouraged him to start his own service company, Crescent City Artists LLC.

“Well, my wife Inez really catapulted me into doing this Mardi Gras float painting business as a service company as opposed to just punching a clock for Joe Blow,” Rene said.

On the contrary, through Crescent City Artists, the Pierres are able to lease out services to float builders around the New Orleans and Baton Rouge areas, and Rene comes behind them to complete the painting, which he said has worked well and made for a successful 3 years.

Soon after Crescent City Artists was founded, while watching rental floats pass them by at a second-line parade one day, Inez had another idea to start a float rental service company. With float rentals being popular in New Orleans during the Mardi Gras off-season, not only at second-lines but also at weddings and other events, they predicted that a rental company would be a success. Thus, Pierre Parade Productions LLC was  founded. Rene explained that though the Crescent City Artists is under his name, and Pierre Parade Productions is under Inez’s name, the couple is a team, with all earnings going to the same household.

Rene designed, built and painted his first float by hand for Pierre Parade Productions, and a shared photo of the float brought lots of attention and clientele.

They were on track to have an extremely successful Mardi Gras season this year, with four to five contracts lined up. However, when the city announced that parades will not roll this year due to COVID-19 restrictions, opportunities were lost.

“They [previous clients]’ were like, ‘No, we have to cut the contact, we will rethink next year, I’m sorry Rene,’ and that was really depressing to hear,” he said.

But then, a silver lining appeared about a week before Christmas. While in a hospital lobby for their daughter who had sprained her ankle, the Pierres saw a newscast segment reporting on people planning to decorate their homes as floats for the Krewe of House Floats in lieu of attending parades. 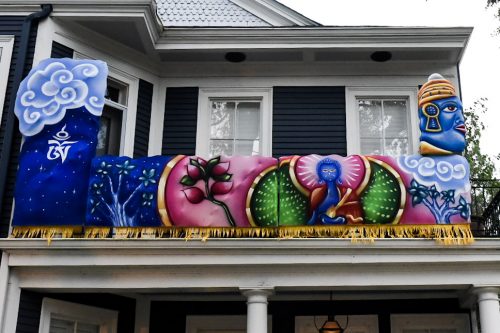 A vibrantly painted porch float by Rene Pierre is attached to a balcony that over looks Carrolton Avenue. (Camille Barnett, Gentilly Messenger)

“I said, ‘Honey, did you hear that? I see the dollar ticket out,’” he remembered saying to Inez. “‘No more worries. We’re going to build porch floats the way I do them, and I think it’s going to be a success,’ and she said, ‘Well, let’s do it.’”

The couple received their first two clients from having their contact information listed on the Krewe of House of Floats website as laid-off float artists. Those clients shared photos to social media, recommending Crescent City Artists to friends, and business inquiries took off from there.

“It just went viral,” he said. 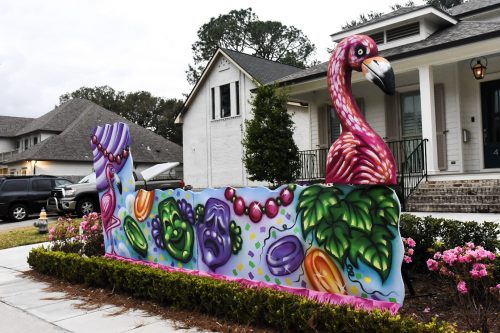 A flamingo-themed porch float, painted by Rene Pierre, stands tall in the front yard of a home on Flamingo St. in Lakeview. (Camille Barnett, Gentilly Messenger)

Not only did the posts attract local attention, but they attracted attention nationwide; he got a call from a friend from Texas who had seen photos, and even received inquiries from North Carolina and New York about shipping painted, constructed designs across states.

Instead of simply attaching elaborate Mardi Gras float-resembling props and decorations to homes, Rene creates large designs to resemble the dimensions of a float.

“I’m actually making the facade, literally as if I’m peeling off the side of a wall of a float to tack it up to your porch,” he described.

With so many clients and Carnival season here, Rene explained that construction and success have been a team effort. A friend provided a vacant space in New Orleans East to work on construction; another friend, a retired carpenter of Blaine Kern Studios, lent a hand. Friends and family of the Pierres came together to make order fulfillments possible.

“It’s a true blessing and mind blowing. I had no clue that a handful of porch floats was going to turn into 30,” he said. “It’s just unbelievable.”

Rene said that with COVID-19 cases continuing to spike and many not abiding to restrictions in place, he does not foresee Carnival parades rolling in 2022 either and predicts that next season will look similar to this year’s.

However, with New Orleans residents known to love festive and elaborate decorations during holidays, especially during Mardi Gras, he does foresee the porch float trend continuing as a city tradition, even when parades do start to roll again. 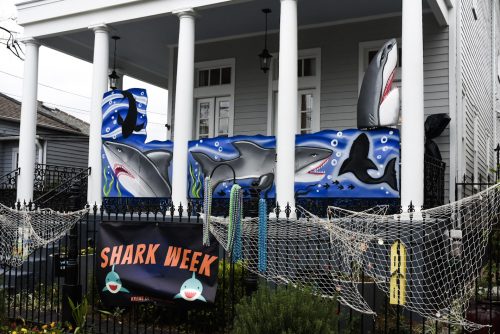 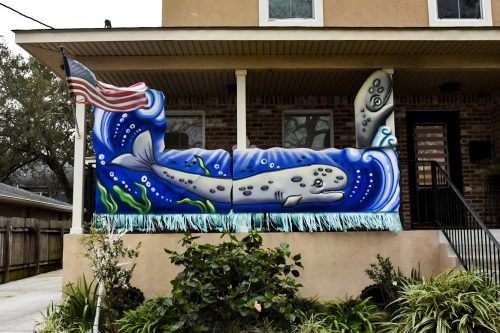 A giant whale is painted across a porch float by Rene Pierre and attached to the balcony of a home in a Gentilly neighborhood. (Camille Barnett, Gentilly Messenger)

Reporter Camille Barnett can be reached at camibar1995@gmail.com.