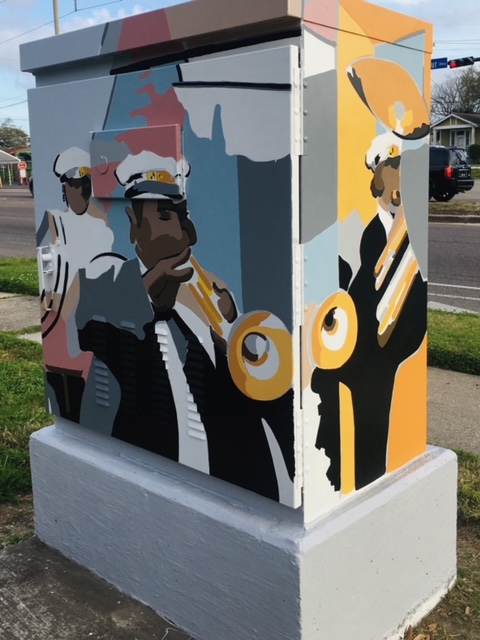 Have you ever wondered how those painted junction boxes on the neutral grounds around the city got there? The answer is: it is the brainchild on Jeannie Tidy, who has a long  history of working in community revitalization. The nonprofit organization Community  Visions Unlimited took on the project post-Katrina.

The Gentilly Development District and the Gentilly Gardens and Terrace Association signed an agreement with Community Visions to decorate 23 more boxes, in addition to the 26 that have already been completed. Gentilly is on the way to having more boxes  than most other New Orleans neighborhoods.

“Each box  costs $750 to paint,” Tidy said, and any local artist over age 18 may register with our  organization to be selected. “Currently we have 80 artists on our roster.” Given a choice,  artists who live in the neighborhood get preference. 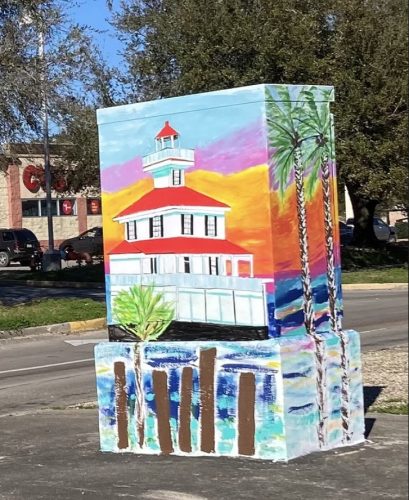 One such artist is Linda LeBoeuf, who has painted 39 boxes around the city. “I’m really  more of a portrait artist,”  LeBoeuf said. “So I have done plenty of those: Leah Chase, horn players and dancers, to name a few.”

Someone mentioned the project to her, and after talking with Tidy about the  goals and the image themes, she realized it was a good fit. She’s been at it for three years  now.

“I painted the Lighthouse near Rouses on Franklin and Leon C. Simon, and the cardinals on Paris and Mirabeau in Gentilly,” she said.

With a background in advertising, LeBoeuf understands visual impact. “I think about the images with the ‘three-second rule’ in mind. People driving or riding by have to be able to take in the image in a short period of time, so I go for bold designs and bold colors,”  LeBoeuf said. 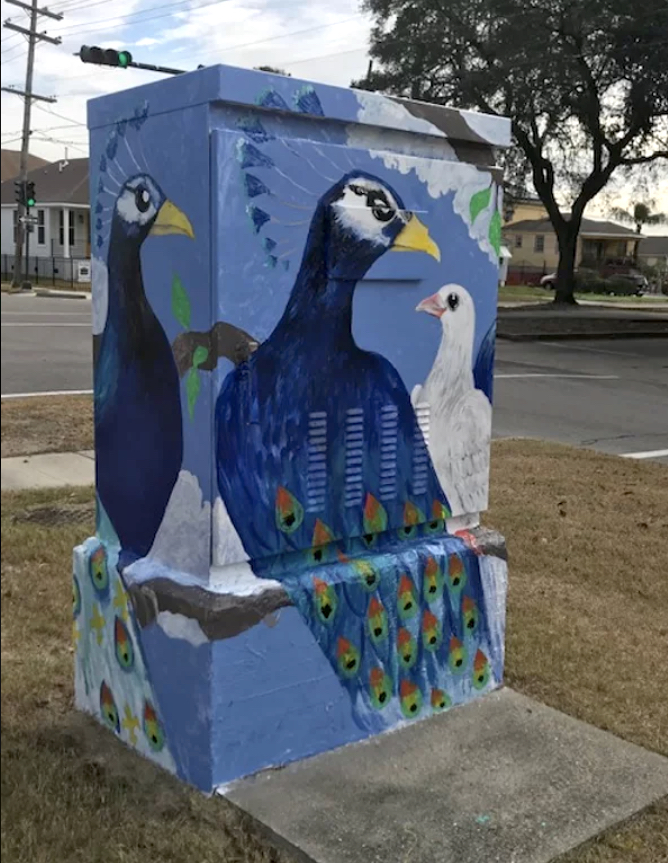 Peacocks pruning at St. Anthony and Filmore by Jennifer Lindsley (courtesy of CVU)

Pontchartrain Park resident Gretchen Bradford, who heads up the Gentilly Development District, met Tidy through a friend. “I was impressed because the work she is doing is not only enhancing the  beauty of our community, but her organization provides income to local artists, which is a  good service,” Bradford said.

She continued: “I was driving down Gentilly Boulevard and I actually saw  the artist painting one of the utility boxes. I always see the boxes when they are completed, so it was nice to see the  work in progress.”

More utility boxes will be turned into works of art throughout Gentilly. “This is great because it will assist in the  beautification and support for local artists,” Bradford said. The Gentilly Development District supports the arts and economic development in the entire Gentilly area. 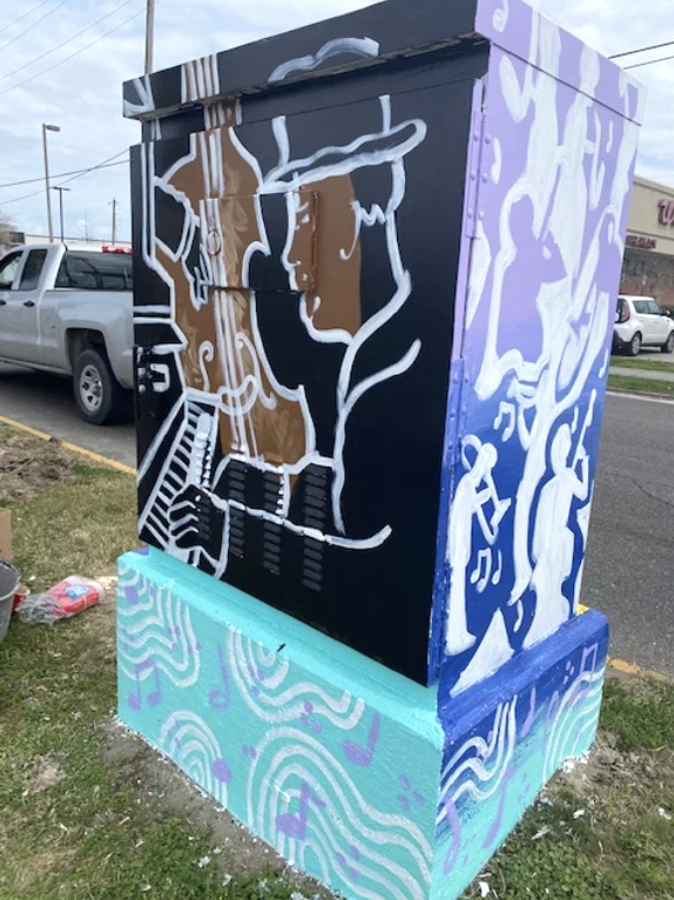 Tidy started this “art box” project in the devastated Lakeview neighborhood to to lift people spirits after Katrina, as well as to aid rebuilding and economic development. She initially sought permission from the Department of Public Works but was directed to the neighborhood associations. So with the help of then-Councilwomen LaToya Cantrell and Susan Guidry and Denise Thornton of Beacon of Hope, Tidy went to work.

This has now grown into more than 200 in the city of New Orleans, with more than a  dozen others in the outlying suburbs. “Our goal really is to have every one in the city  painted,” Tidy said.

Once the utility box to be painted is identified, the registered artists are notified. The selection takes into account the neighborhood’s wishes and design ideas. The proposals are reviewed by a  panel consisting of two arts experts and a neighborhood representative that selects the  artist. The review process is blind; that is no one knows the identity of the artists behind the submissions.

The selected artist receives a paint kit from Helm Paint, a project sponsor. They also receive a “mini box” — a replica of the actual junction box that they paint with the identical design. These mini boxes form an important part of the project’s funding, as these collectors’ items are auctioned off in competitive bidding during an annual fundraising gala.

“Sadly, we could not hold our event last year due to the pandemic,” Tidy mused, “but despite that, we held an online version and did manage to raise a respectable amount of funds.” But like most other nonprofits, revenues are definitely down.

Community Visions Unlimited has raised over $100,000 to pay the artists, purchase paint  supplies and maintain the art boxes. And they are continuing to beautify Gentilly and to  make those junction boxes look interesting. And, as a side benefit, the graffiti and the litter the boxes once attracted are no longer an issue. 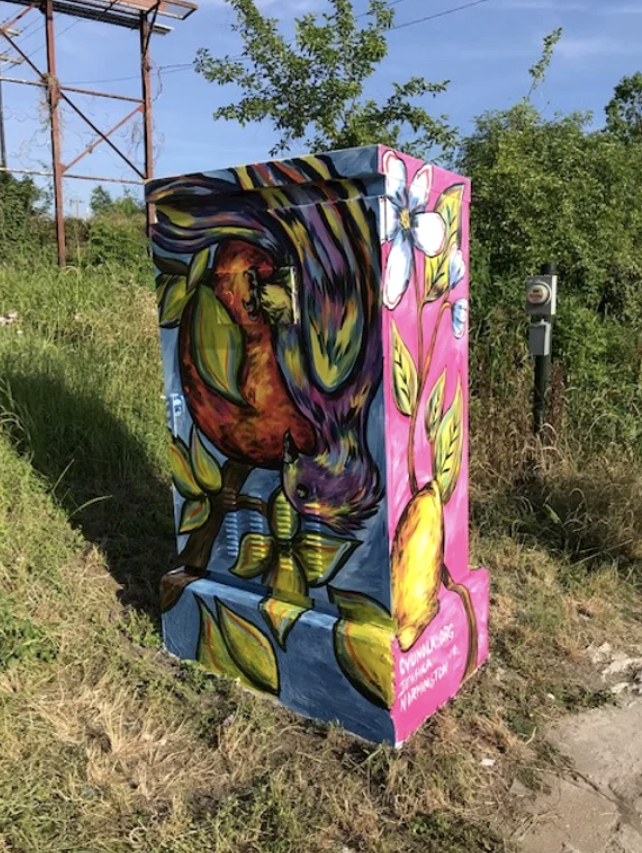