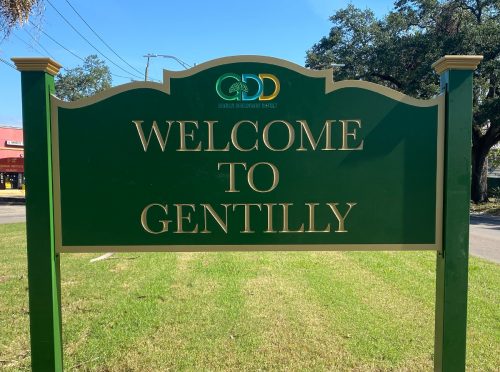 The Gentilly Development District announced its plans Tuesday (Nov. 9) for ongoing beautification and economic development projects for the Gentilly area.

Developments such as the utility art boxes and the new Welcome to Gentilly signs popping up around the community are products of the Gentilly Development District. And there are plans for more projects during 2021 and 2022. They include murals on overpasses, new signage for Pontchartrain Park and improved landscaping.

“The GDD receives a stream of state funding annually from the Fair Grounds Race Course, and this past year during the two legislative sessions we were fortunate to secure a one-time stream of income for the 2021 year,” said Chairman Joe Bouie, the state senator for the 3rd District, which includes Gentilly. “These funds are to be used for projects that will benefit all of Gentilly.”

The GDD was created by state legislation in 2008 to support the community by investing annual funds in projects that assist economic development, beautification and crime prevention for the overall Greater Gentilly area. It receives state funding annually. 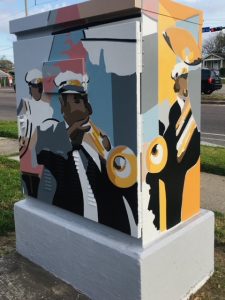 Two of the past projects the GDD helped fund are the renovation of the Milne Boys Home and the installation of crime cameras. GDD worked closely with the city on these economic development and safety projects.

The Milne Boys Home was transformed into the New Orleans Recreation Development Commission Headquarters in 2013. Damaged by Hurricane Katrina, the historic property underwent an $11.2 million renovation with funding from FEMA recovery money, city bond funds, and state capital outlay funds through the GDD.

The GDD financed the installation of eight new crime cameras in 2018 to help improve the New Orleans Police Department’s ability to respond to crime in Gentilly. Locations for the cameras were chosen based on public complaints as well as guidance by the NOPD’s Third District.

Other for projects for 2021-22 include pole banners along Gentilly Boulevard, murals on two of the major overpasses to help combat graffiti, signage for Pontchartrain Park that celebrates its historic designation, and landscaping at the welcome signs and other community areas.