Homeowner stormwater management program expands in Gentilly and beyond

A permeable driveway was installed as part of the 100th Community Adaption project in Gentilly. (Mayor’s Office photo)

The New Orleans Redevelopment Authority (NORA) and city of New Orleans recently announced a $5 million expansion of the Community Adaptation Program for low- to moderate-income homeowners to manage stormwater on their properties across the city.

To date, NORA has completed 179 projects in Gentilly through its original $5.9 million allocation from the $141 million National Disaster Resilience grant from the U.S. Department of Housing and Urban Development.

The existing NDR-funded program in Gentilly provides up to $25,000 worth of residential-scale stormwater management interventions at no cost to homeowners.

Participating CAP homeowners can choose from a variety of green infrastructure improvements such as the installation of permeable pavement (including to replace impervious concrete surfaces like patios and driveways), stormwater planter boxes, tree plantings, infiltration trenches, rain barrels and rain gardens.

The program’s 150th project was at the Pontchartrain Park home of Lydia Taylor. Even after hauling in two truckloads of dirty after Hurricane Katrina, Taylor said, she had standing water in the yard after a rain before signing up for CAP.

Instead of grass in her backyard, she now has a permeable patio, tall handcrafted planters filled with Louisiana iris and beds with ginger and sweetbay magnolia trees. The plants were chosen for their root systems’ ability to absorb water, said Randy Smith of Wingate engineers.

“In addition to the beauty of the project,” Smith said, “it serves the purpose of stormwater management.” The interventions can capture 6,170 gallons of stormwater, the equivalent of the first 1.98 inches of rainfall on the property during a major storm.

Taylor said she also loves that she no longer has to mow grass. “I have a lawnmower for sale right now,” she laughed. 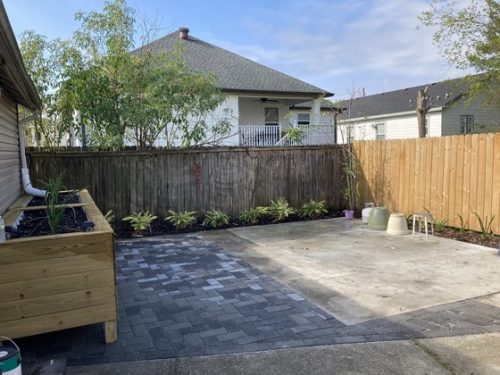 Cumulatively, the first 179 completed CAP projects are able to store 532,306 gallons — the equivalent of approximately 6,653 bathtubs — of stormwater in the Gentilly area, allowing it to remain on site and gradually infiltrate the underlying soil instead of entering the city’s drainage system.

On average, each CAP home site can manage at least an inch of rainfall on the property.

“Stormwater management on private property is a key strategy for our city to reduce stormwater runoff and free up existing capacity in our grey infrastructure system,” said NORA Executive Director Brenda M. Breaux. “If each property could detain the first inch of rainfall on-site, in addition to the inch that can be managed by our pipes and pumps in the first hour, we could greatly increase our collective capacity and reduce the number and severity of flood events.”

“This additional funding could not come at a better time, as this gives our working-class homeowners an added layer of protection and security in the wake of peak hurricane season at no cost to them,” said Mayor LaToya Cantrell.

NORA is currently accepting applications from low- to moderate-income (up to $62,700 for a family of four) homeowners for the existing NDR-funded Community Adaptation Program in Gentilly.

The pre-application and more information about the Gentilly program can be found at noraworks.org/cap. Applications for the new bond-funded program for the rest of the city are expected to be available this fall.

Public engagement continues to be an integral part of the CAP and GRD. Virtual “CAP Chats” is the online event series that the city uses to showcase completed projects and the homeowners’ experience throughout the process. View previous episodes here.

For more information about the Community Adaptation Program, visit nola.gov/resilience, send an email to roadwork@nola.gov or call 504-658-7623. 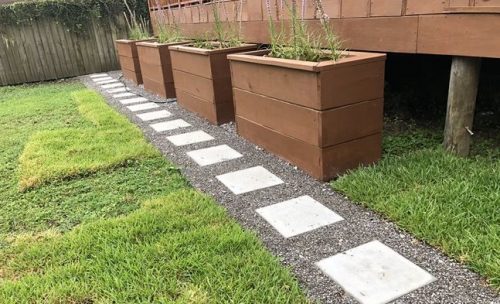 Planters and permeable pavers installed for a Community Adaption Program participant.  (via NORA)