The Masonic Temple planned for 3200 St. Bernard Ave. (LaTerre Engineering via Board of Zoning Adjustments)

A new Scottish Rite Masonic Temple is planned for the vacant lot on St. Bernard Avenue near Interstate-610. It will be home to the Supreme Council of the 33rd and Last Degree of the Ancient and Accepted Scottish Rite of Freemasonry, which has owned the property since the 1970s.

The organization will use this site as its headquarters with meeting and office space. The masons will host meetings, educational programs and other events in the building. It will replace a larger building that the group vacated after Hurricane Katrina and tore down in 2014.

Freemasonry is an international fraternal organization that can be traced back to medieval stonemason guilds. They have been in New Orleans since Colonial times; an early local lodge received a charter in 1793.

The city classifies the temples as social clubs rather than churches, as the freemasons are not a religious group but a civic, charitable and social organization. 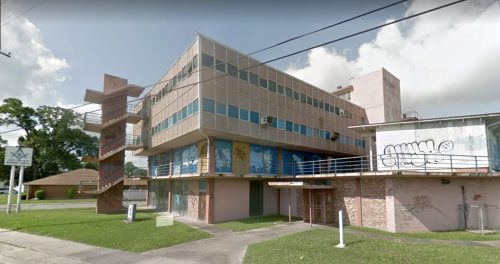 The Masonic Temple and office building at 3200 St. Bernard Ave. in 2011. The building has since been demolished. (Google Maps)

Before Hurricane Katrina, a mid-century steel-and-glass structure was on the site. It was originally constructed as a furniture retail store called the New Orleans Housing Mart.

The freemasons converted the large pink structure to a mixed-use building with office space as well as their Masonic Temple. The New Orleans office for District 97 of the state House of Representatives, a seat then held by Arthur Morrell, was in the building.

The four-story building sat vacant after the 2005 flooding and gradually deteriorated. In 2014, the freemasons applied for a permit to demolish the structure, but the request was denied by the Neighborhood Conservation District Committee. They appealed the decision to the City Council, where the demolition was approved.

The plans for a new temple ran into conflicts with the city’s zoning regulations designed to discourage suburban-style car-oriented developments. The proposed development includes 33 parking spaces, while the Comprehensive Zoning Ordinance allows a maximum of 17 spaces for the 5,432-square-foot building.

The Board of Zoning Adjustments in July granted the freemasons a variance to increase the number the number of parking spaces to 33.

The original proposal had the building set too far back from St. Bernard Avenue, but the plans were adjusted to meet the required 20-foot maximum setback. A sidewalk was also added to the plans to address the city’s concerns.

Once permits are issued, construction is expected to last from eight to 10 months. 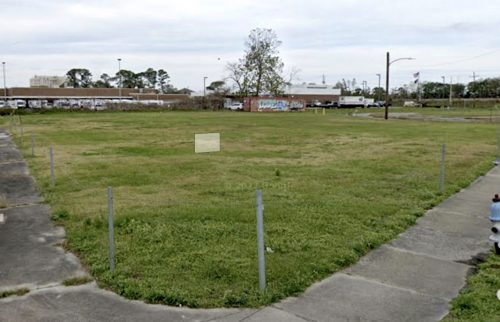 The lot at St. Bernard and Florida avenues is a trapezoid shape. (Sherman Strategies photo)