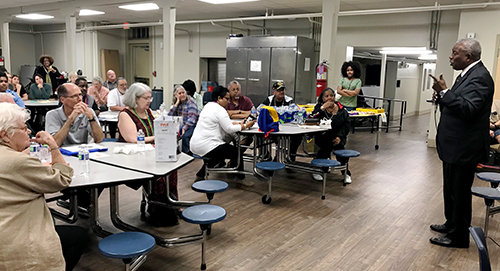 Across New Orleans, it seems nearly all community meetings have ventured a little off script into a common theme lately — car burglaries, and just what there is to do about them.

So it likely didn’t come as a surprise to state Sen. Joseph Bouie that after wrapping up his legislative update to the Gentilly Terrace and Gardens Improvement Association on Tuesday night, he was faced with questions about juvenile crime — just hours after news broke that an 11-year-old had been arrested for 22 car burglaries in the area.

“As a community we must recognize the spike in juvenile crime we see we’ve sort of facilitated,” he said to the group at Audubon Gentilly School, blaming the problem on a broken system where young people aren’t in a structured environment and lack opportunity.

“For years I predicted we would have this spike in juvenile crime.”

Bouie, who lives in the Gentilly Terrace neighborhood, suggested a multi-phase approach in dealing with the issue.

First is simply the public safety aspect — policing and trying to protect property.

But like many others, Bouie said what is key is what comes after that — what happens after someone, in many cases a juvenile, is arrested for a crime.

Bouie says that’s the time when there needs to be some sort of intervention to put the juvenile in a structured environment, rather than simply releasing them and allowing a cycle to start over again.

“If you don’t provide constructive activities, they’ll find other ones,” he said.

That might also deter drug dealers from employing juveniles, which Bouie says happens because the dealers know that even if the juvenile is arrested, they will likely be back on the streets in short time.

Pierce Huff, an aide for District D Councilman Jared Brossett, also suggested the only real way to stem the car burglary problem is through systemic reform, saying, “If the quality of life were better, maybe these kinds of things wouldn’t go on.”

“If you make the whole city better, maybe you alleviate some of these issues that are heading them to a life of crime,” Huff said.

Brandon Gregoire, a board member of the Gentilly Terrace and Gardens Improvement Association, said a goal in the near future is to hold joint meetings with nearby neighborhoods — like Lakeview — to address the crime issue.

A meeting last month organized by Lakeview civic groups drew around 1,000 people after strings of car break-ins in the neighborhood.

“We’re contiguous with Lakeview. A lot of that crime extends,” Gregoire said, adding that many of those arrested for break-ins in the area haven’t come from Gentilly.

Both Hogan and Gregoire stressed the importance of reporting every car break-in — even if it might seem insignificant in the bigger picture.

Case in point — Gregoire said he just received a summons in the past two weeks to appear in Juvenile Court after an arrest was made in his car break-in case.

He reported that two years ago.