Milneburg neighbors called on to find new ways to solve the an old problem: flooding 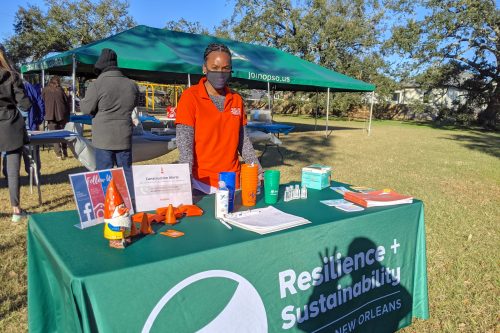 Though it was a brisk January day, the sun was shining over Milneburg Stormwater Project outreach event on Saturday (Jan. 29). The event featured displays by Roadwork NOLA, artist Michel Varisco and the project’s design firm, Dana Brown & Associates.

The city-sponsored event at St. James Park officially kicked off the Milneburg Stormwater Project, part of the Gentilly Resilience District.

Using large maps, neighbors had the chance to show where they observed frequent flooding. They also could take home native plant seeds and personal protective equipment like face masks and hand sanitizer.

At a slightly waterlogged table, artist Michel Varisco was demonstrating a series of aquatic sculptures that doubled as miniature fountains. 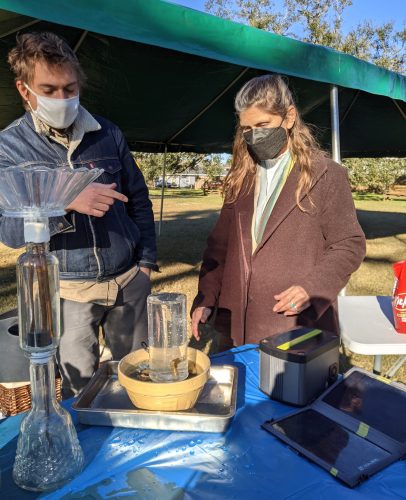 “It’s fun to experiment with all the ways we can engage with water,” Varisco said. In one of the miniatures, a solar-powered pump created a current in the glass bottle that, when stirred, creates a vortex-like effect. Another one of the table-top sculptures demonstrated an ancient technique to create a fountain.

“We’ve been trained to think of pushing water out of the city,” Varisco said. “But we should learn to integrate it, to recharge the water table.” She used copper and glass materials purposefully to avoid plastic and petrochemical products.

Though it’s unclear whether her sculpture will be a part of the final design, she said she would love to incorporate sculpture into the Milneburg Stormwater Project.

Thus far the design for the project is still in the early stages. The city expects the design process to wrap up at the end of this year, with construction bidding process starting in spring 2023. Construction is scheduled to be completed in spring 2024. The project was relocated from the Milne Campus on 5420 Franklin Ave.

At a native plant display, residents could observe how a plant can absorb water, keeping it from overburdening the drainage and pump system, while remaining in the water table and preventing subsidence. 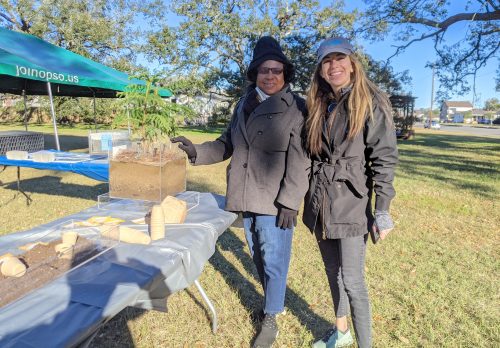 At the native plant station, community residents could plant native seeds in biodegradable cups of soil, to bring home to their yards and gardens.

Dana Brown, president of Dana Brown & Associates, the designers for the project, said that one of the aspects of the project will be fortifying the field-like areas of the neighborhood. This would mean removing the turf, excavating the heavy clay soil, and first adding in a lawyer of large rocks. This provides spaces for water.

Next, a layer of sandy soil is added, then a hardy breed of turf grass. Though the end product looks similar on the surface to what it replaces, it absorbs more water so is less likely to get soggy and require replanting after heavy rains.

She said that the project will take the water off of the streets in the “Prentiss watershed” and direct it into the park, where it can be absorbed by the plants and sub-surface infrastructure. Rainwater would be filtered by this process and would end up in the city’s existing pump system well after a rain event.

Brown said her team is “scoping out to see what works.” However, she added that the large live oaks in St. James Park as well as the playground equipment will definitely be a part of the park’s future incarnation.

“We’re not going to harm trees,” she said, though more may be planted.