Neighbors celebrate the Pontilly Stormwater Network: ‘It’s been actually saving us from flooding’ 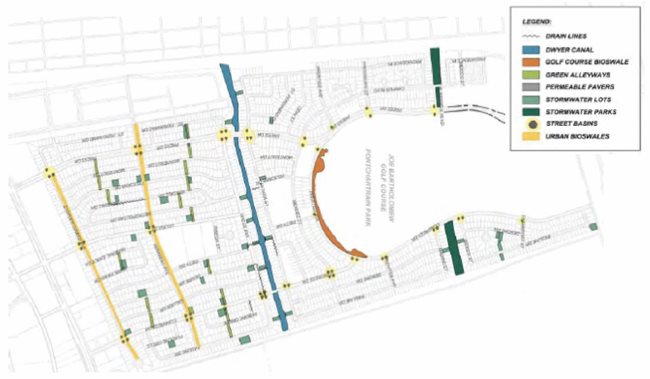 City officials gathered in Pontchartrain Park on Wednesday to mark the end of Phase 1 of the Pontilly Neighborhood Stormwater Network construction.

Neighbors, whether they were at the ceremony or not, were also celebrating the fact that, after five straight days of rain the week before and an unusually wet April, the normally flood-prone neighborhood stayed dry.

The network in the Pontilly area, which includes both Pontchartrain Park and Gentilly Woods, can store up to 8.1 million gallons of stormwater, city officials say. It can reduce flooding by as much as 14 inches during a 10-year rain event, a level of rainfall that has 10% chance of occurring in any year.

Gretchen Bradford, the Pontchartrain Park neighborhood association president, can attest to the effectiveness of the green infrastructure improvements. “We’ve watched it work. Over the past couple of months, with the rain events that we’ve had, we actually saw how the process worked — how it fills up, how it slowly goes out,” she said. “It’s been actually saving us from flooding.” 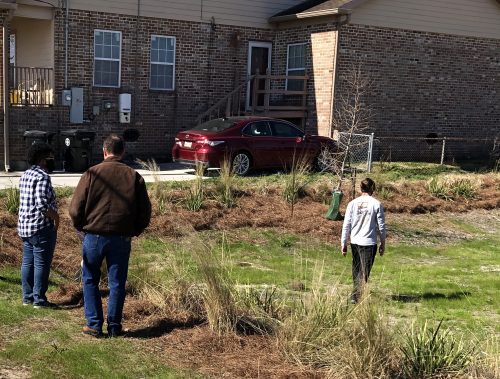 The project applies innovative flood-control techniques that officials said will be replicated in other areas of the city. It is also getting some national attention. Project manager Meagan Williams was named a CNN 2020 Champion for Change for her work in Pontilly and was honored by WaterNow as a 2021 Impact and Emerging Leader.

Williams, a New Orleans native, decided to become a civil engineer after the Katrina levee breaches submerged the city. Then a school girl, she vowed to develop ways to control the water.

“We have to change the way we think about water, how we live with water, how we manage water,” Williams said on Wednesday. “It’s the way that we keep this city moving forward.”

Phase 1 of the Pontilly project included:

The 2005 levee failures were the impetus for the Pontilly Neighborhood Stormwater Network. A group of Pontilly residents, still struggling with Katrina recovery, approached the New Orleans Redevelopment Authority with design concepts to mitigate flooding in the area. NORA was impressed enough to apply for the FEMA grant.

The city’s infrastructure chief, Ramsey Green, paid tribute to the Pontilly residents at last week’s ceremony. “One thing I love so much about Pontchartrain Park neighbors is they are not people who just complain about infrastructure,” he said.

Turning to a group from the neighborhood, he continued: “You all get the science, the data, and that we have to do innovative things to help this city survive for another 300 years. And you guys made this happen.”

NORA received a $15 million FEMA hazard mitigation in 2010 to fund the project. The project got an additional federal funding boost through the U.S. Department of Housing and Urban Development’s National Disaster Resilience Competition as a project within the Gentilly Resilience District.

“This is an innovative and creative network of stormwater management solutions. These projects will not only reduce flood risk, but also improve recreational and bicycling opportunities for our residents and connect them to economic opportunity in the water sector,” Green said.

The HUD natural disaster mitigation grant is financing the design and construction of Phase 2, which is focusing on the Dwyer Canal, according to a fact sheet on the project.

The HUD funds will be used to create a park with walking trails and other amenities, a recreational and educational hub that will connect, rather than separate, Gentilly Woods and Pontchartrain Park.

Other Gentilly Resilience District projects are moving forward, Mayor LaToya Cantrell said at the ceremony, with more than $30 million in Resilience District projects to be advertised in the next few months, She added that more than $84 million in the stormwater management and recreation infrastructure projects in design are slated for construction this year