Neighbors come together at Edgewood Market, rain or no rain 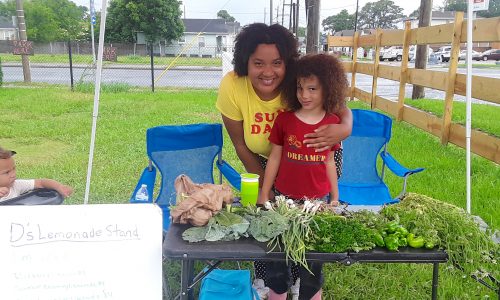 Ashley Webb and her daughter at their D’s Lemonade at the Edgewood Market. On Sunday, June 6, they were selling herbs from the family’s garden. (Jesse Baum, Gentilly Messenger)

Not pouring rain, nor flash-flood warnings, nor the swiftly swirling clouds on the radar could deter the Edgewood Park Neighborhood Association from putting on their monthly market, held the first Sunday of every month in front of Tip-Top snowballs on Franklin Avenue.

Though attendance was on the slim side — on a sunny day there can be twice as many vendors — the sellers were happily chatting with each other during a break in the rain. 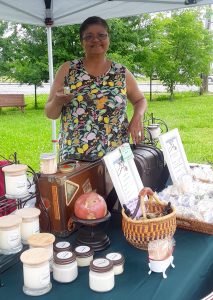 Ramona Briggans, who owns Karavan Handmade, lives in Edgewood Park down the street from the market. She started making candles, soaps and other bath and body products four years ago, and began selling her wares professionally three years ago. Like the other vendors at the market, her business is family owned.

Briggans worked all over the globe teaching English as a second language, and her travels are reflected in her products. Her candles, which are meant to “transport” via olfactory sense, are all named after international destinations.

Ashley Webb runs D’s Lemonade, a family operation named for her daughter, who was with her in the tent.

On Sunday she sold oregano, mint and parsley, in generous bunches for one dollar. The herbs and onions were fragrant and still speckled with clods of dirt from the garden. Webb’s husband, Andy Barcelo, grows the produce. He is taking courses to become a Master Gardener, and also wears the hat of president of the Neighborhood Association.

Webb says that the market has intrinsic value, as well as benefiting the neighborhood association.

According to Webb, the neighborhood association has been using the fees mainly to support their monthly clean-ups, cleaning up litter left by the overpass and on Peoples Avenue.

Webb said the group has plans to bring more events to Edgewood Park, such as a series of gardening workshops, and are also considering a family movie night. Webb said that one of the current goals of the association is to encourage businesses to come to the neighborhood, which is largely residential.

The neighborhood Market is held the first Sunday of each month, from 11 to 3 p.m. at Tip Top Snowballs, 3317 Franklin Ave.