Candidates for 12 New Orleans elected offices, including mayor, city council, and judges, participated in a forum at Dillard University hosted by the Independent Women’s Organization. After candidates for all offices had participated, members of the organization voted and endorsed a candidate for each office.

Issues of crime, economics, education and infrastructure–mainly streets–were discussed frequently in the questions, which were written by members of the organization. The forum was moderated by radio personality Gerod Stevens.

There are five democratic candidates for City Council District A: Aylin Acikalin Maklansky, Joe Giarrusso, Drew Ward, Daniel Ring, and Tilman Hardy all took the stage to present their platform and answer questions from Stevens. 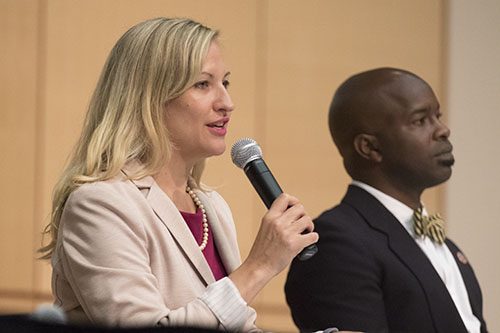 Aylin Acikalin Maklansky (left) introduces herself as a candidate for City Council’s District A seat. Candidates for all local elected office presented themselves before the Independent Women’s Organization in Georges Auditorium at Dillard University on Saturday, July 29. (Zach Brien, GentillyMessenger.com)

Aylin Acikalin Maklansky, former legislative director for Nadine Ramsey, pushed the importance of storm water management and coastal restoration. This is her take on the issue of repairing the streets, as well as her first economic plan, using federal grant money:

Drew Ward, a writer and editor, spent his one-minute introduction apologizing to the crowd for speaking ill of District A councilwoman Susan Guidry in 2014. When asked about his first economic plan, Ward wanted to make sure the whole district was given equal treatment because there are parts that have been ignored.

When asked about how he would fix the roads, Ward said New Orleans should look to other cities’ successes.

“Concrete will always crack here because our ground is not made for concrete,” Ward said. “The technology is old that works here. London, Prague, St. Petersburg, Berlin, these cities all have the same soil we have here. We’re not unique. They have pavers, permeable structures that can move.”

Tilman Hardy, founder of CORE USA, calls for community action into his approach towards economic proposal and fixing the streets.

“The streets, we want to make sure that the young people are able to participate in all of the conversations, in all of the job opportunities around building and rebuilding our streets,” Hardy said.

“We have a beautiful asset in the district, a couple of them actually between Delgado, Loyola, and Tulane,” Giarrusso said. “To the extent that we can marshal our resources with the universities and have them partner with businesses that exist, make sure that they are working with the people necessary to develop curriculums to find better jobs.”

Giarrusso’s neighborhood association created the notable “Fix Our Streets” campaign. He wants to make sure all possible revenue streams are going to funding the streets, funding repair without raising taxes. The city can get money from gas sales tax, a millage from the state government, funds from parking meters, parking tickets, and motor vehicles sales taxes.

Daniel “Dan” Ring, a transplant from Boston, wants his first economic initiative to be a program funded partially by the public safety budget to teach and mentor kids about working in the restaurant industry. Ring also wants to pull from the public safety funds to pay for road repair because they are “a matter of public safety”. 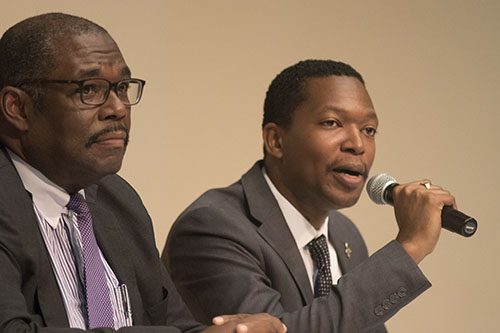 Six Democratic candidates are running for the District B seat: Eugene Ben, Seth Bloom, Timothy David Ray, Dr. Andre M. Strumer, Catherine Love, and Jay H. Banks. Each was asked about their approach to crime and what would be their signature legislation.

Bloom wants to make the city more accessible to people.

“We need to be targeting our efforts more so on the front end, to be proactive, to be in those neighborhoods. We know where those red dots are that we see in the newspaper all the time that say where crime occurs,” Ray said.

Timothy David Ray wants his legacy as a councilman to be in how he includes young people.

“The city used to intentionally appropriate resources to children and the youth in the city. That’s affected me now,” Ray said. “I’m running for the real city council. I think we have to get back to that. We have to focus on putting our children, our youth into our budget and actually plan programs for them.”

Eugene Ben sees the workforce as the best way to fight crime. Ben works with a non-profit the Keller Foundation. They have just begun a prison re-entry program.

“We look at programs that basically identify resources for people who are basically incarcerated and then coming back into the neighborhood to have opportunities–not only to restructure them, but basically look for programs that energize them,” Ben said.

Ben would like to have the enforcement of community benefit agreements be his legacy. They have played an important part in what he has heard from his constituents.

Veterinarian Catherine Love wants to approach the issue of crime by taking on the responsiveness of NOPD precincts. She has called 911 before, and no one has shown up.

“I had another $400 robbery, literally walking distance from the precinct. They never showed up,” Love said.

Love wants her legacy to be about how she helped small businesses, especially those run by women of color.

Andre Strumer, Ph.D., thinks the right approach to crime is returning the power to the people. “Get the community people, the neighborhood people; get the power back to them so that they can look out for each other,” Strumer said.

Strumer has a vision for the 300,000 blighted properties in New Orleans. Build homes and use each construction site like a classroom, teaching kids a trade.

Jay H. Banks, director of the Dryades Street YMCA, believes that to stop crime you have to go to the source. “The biggest issue that concerns me is that when you talk to young people, far too many of them will let you know that they don’t have any hope,” Banks said.

Banks wants his signature initiative to be helping locals stay in the city that might otherwise get priced out.

“If we don’t provide access and resources for people who are here to be able to stay here, we are not going to have the New Orleans that we have had,” Banks said. “If you lose the people, you’re going to lose what makes New Orleans special.” 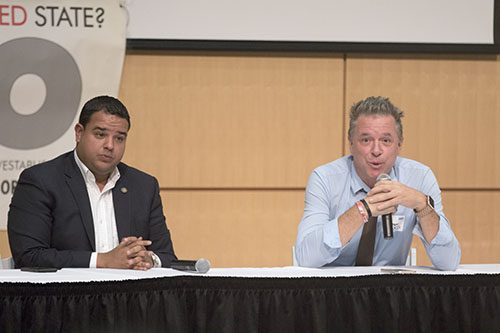 There are three people on the ballot for City Council District D. Two showed up to the forum: incumbent Jared Brossett and Joel Jackson. They were both questioned about their views on historic districts and how they would handle initiatives if they took office.

Brossett, when asked about historic districts, could not answer definitively because it depends on the neighborhood and the situation. “I have supported local districts where I see it necessary… I right now do not believe that Gentilly Terrace is a good fit,” he said.

Brossett knows it is important to incorporate other ideas into policies. “I realized when I came into office three years ago that nothing would progress without meaningful input from the public,” he said.

Jackson, when asked about historic districts, admittedly did not know enough to respond definitively. “In terms of historic district zoning and what not, that’s something that I would have to get up to speed on, quite frankly,” Jackson said.

Jackson decided to run for office based on what he has heard from his neighbors in the Seventh Ward.

“In terms of making initiatives happen, I can only tell you what I’m hearing in my neighborhood now,” Jackson said. 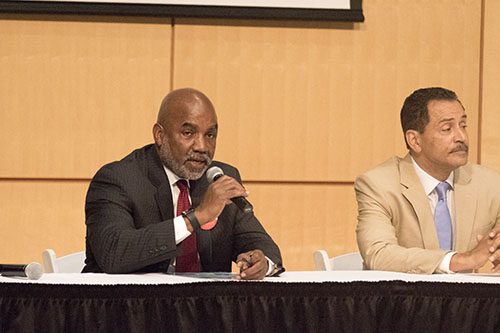 James A. Gray II, left, Incumbent City Councilman answers a question before the crowd. Candidates for all local elected office presented themselves before the Independent Women’s Organization in Georges Auditorium at Dillard University on Saturday, July 29. (Zach Brien, GentillyMessenger.com)

The candidates were asked about their position on the Entergy Power Plant in New Orleans East.

Hebert and Charbonnet oppose it, on the grounds that it is unsafe and bad for the environment.

Clivens did not say definitively where she stood on the issue.

Gray did not have a position on the power plant because he is unsure if it is necessary. “I think it’s a mistake for anyone to make a decision before they go through the process and get all the information in,” Gray said.

Where do economic issues meet crime and safety? Like other candidates, Alicia Plummer Clivens thinks community policing is the proper way to handle crime in New Orleans East and the Lower Ninth Ward. “Economic equality of the city’s budget and resources is what we need in New Orleans East,” Clivens said.

Dawn Hebert knows the perception of District E needs to change for the economic situation to change.

“If you’re driving into New Orleans East, you see blight on the way in and high grass on the way out. This has got to be improved so we can get developers to want to come to our community,” Hebert said.

“That is a demographic that would draw a certain kind of retail that would help us with jobs and other economic development,” Charbonnet said.

See below which candidates the IWO New Orleans chose to endorse after the forum:

[Update 8/1/17: This article originally stated Seth Bloom as president of the Orleans Parish School Board, however, Bloom left the board entirely in 2016. The statement has since been omitted.]