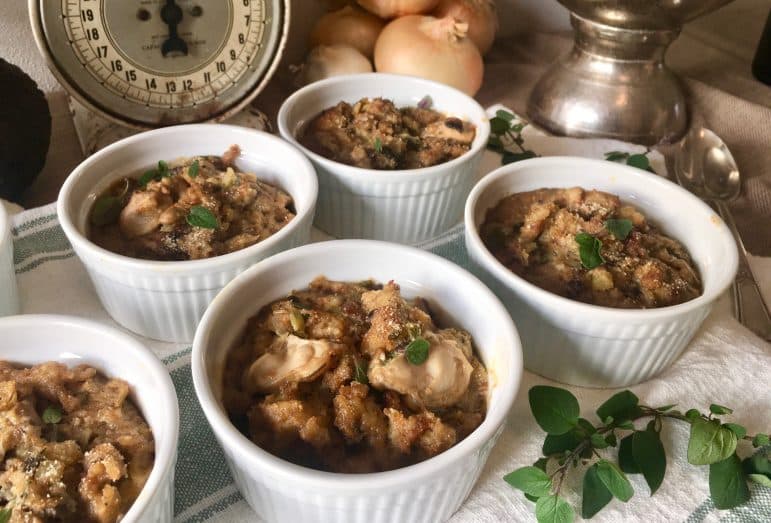 Below is the Oyster Dressing recipe I’ve prepared since 2006. It was recorded at the elbow of my cousin Velma, then 93. At 4-foot-10, still whip-smart and eternally feisty, she bossily instructed me in “the right way” to prepare the family dressing for an “authentic Creole New Orleans Thanksgiving.”

Her recipe cards and everything else she’d owned were stolen a year before “by that hussy Katrina,” her sobriquet for the hurricane. The recipe she passed down that day, first prepared by her family in the 1800s, had been committed to memory during Prohibition.

Little Velma grew up in an Irish Channel shotgun next to the Brennans, the local restaurateur family. She always alluded to cooking rivalries between the mothers who shared a front porch and a clothesline. Oh, to be a fly on the wall, two Irish women in long skirts debating Creole recipes in turn-of-the-century New Orleans. We’ll never know if it’s true, but I sure hope it was.

By necessity, my Thanksgiving table yields two different Oyster Dressings each year, the Creole French-Spanish (and perhaps German influenced) version and the Irish-Italian version. This might sound confusing to someone who’s not from New Orleans, but, it’s all in the family for our melting pot of locals.

My great-grandmother’s Oyster Dressing recipe, originally from New Orleans, traveled upriver to Plaquemines then back to the city in a reversal of fortune during the last pandemic in 1919.

The century-old recipe’s preparation is almost identical to Velma’s mother’s, but mysteriously includes the addition of a cup of finely minced and browned ground beef. I’ve added fresh herbs and olive oil to the recipe.

Family recipes, lore and tradition aside, this is a year that calls for change. Even the holiest of holies, Creole Oyster Dressing, is turning over a new leaf in my house.

For the first time, great-grandmother’s or arrière grand-mère’s oldest recipe will be baked in individual mini casseroles, or as she would have preferred, les ramequins or ramekins.

Due to COVID-19, New Orleanians are chopping less trinity. Larger feasts are being shelved and replaced with small socially distant outdoor gatherings. Hence, Creole Oyster Dressing has adapted too. Each ramekin is yours to retreat to whatever corner of the yard or porch that you choose.

For those not in the mood to cook, local grocers such as Breaux Mart and Langenstein’s offer delicious and authentic Oyster Dressings that can be purchased without ordering ahead of time. Before baking, I recommend topping their catered dressings with extra bread crumbs and a thin drizzle of melted butter before placing them in the oven.

If you prefer cooking the recipe in a casserole dish, bake for an extra five to 10 minutes.