Officers exchange fire with a shooting suspect, wounding him during a domestic disturbance call on Mirabeau

A woman is hospitalized with a gunshot wound, a man is arrested and two New Orleans police officers are on desk duty after a domestic disturbance call early Monday (May 31) in the 2000 block of Mirabeau Street.

The officers arrived at the home at about 12:30 a.m. “Upon their arrival at that residence, they were immediately fired upon by an individual within that residence,” said NOPD Superintendent Shaun Ferguson at a Monday press conference. “Our officers did in fact return fire as a result of that gunfire exchange.”

The officers found a 25-year-old woman in the home with gunshot wound to her abdomen. The Emergency Medical Service took her to a hospital. 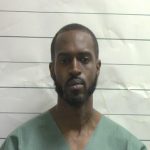 The man, identified as Wilton Anderson, 30, was shot in the leg. “Even with that gunshot wound, he was able to flee the scene,” Ferguson said.

Police set up barricades in the surrounding area and located Anderson about an hour later. He was taken to the hospital and then, after he was treated for his wounds, to the Orleans Justice Center.

He is jailed on one count of attempted second-degree murder, two counts of assault on a police officer and one count of resisting arrest.  Anderson’s bond had not yet been set as of Monday evening.

Other charges are likely, Ferguson said. Police later discovered that a 9 mm semiautomatic pistol removed from the house, which was used to fire on the officers, had been stolen in April, he said.

Investigators believe that Anderson shot the female victim and one of the officers shot Anderson, Ferguson said. Anderson and the 25-year-old woman are related, but police did not specify that relationship.

Both officers involved in the shooting have been on the force for just over a year. Following protocol, they are on administrative leave while the incident is under investigation. The investigation will be conducted internally and overseen by the independent police monitor and the NOPD’s federal monitors, Ferguson said.

Body camera footage of the incident will be released within 10 days, he said. Ferguson declined to name the officers but said the names will be released after the investigation has proceeded.

Further details were not immediately available. Anyone with information is urged to call the NOPD Third District station at 504-658-6030 to speak to a detective, or Crimestoppers at 504-822-1111 to leave an anonymous tip that could be eligible for a cash reward.