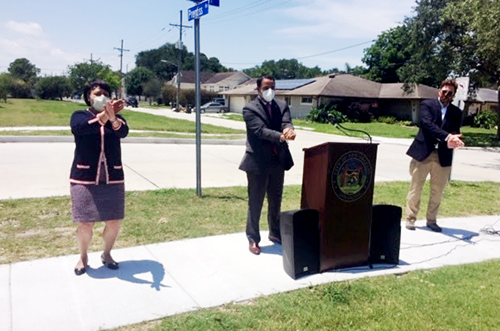 “The completion of the Filmore North Group A roadwork project marks a major milestone for the Filmore neighborhood,” said District D Councilman Jared Brossett at the ceremony, noting the project is just the first stage in $37 million of repairs for the area.

Crews began began work in the Filmore North area in February 2019.  The project is estimated at $6.5 million, an increase of approximately $2 million from the original project scope, according to a recent update. Additional repairs are often discovered as work is being performed, city officials have said.

Construction is ahead of schedule on a companion project, the $4.4 million Filmore South Group A project, the city announced recently.

That project was approximately 60% completed in April, according to the RoadWork website. It is currently focused on the following streets: Miles, King, Moore, Overton, Mandolin, Hamburg and Cartier.

The scope of work for the project as a whole varies by block but includes water and sewer line repairs by Sewerage & Water Board contractors and replacement and street resurfacing by Department of Public Works contractors.

“There is much more to come in District D,” said Ramsey Green, the mayor’s deputy CAO for infrastructure. “There will be an estimated $305 million more worth of construction over the next several years, and $37 million of that will be in the Filmore North and South neighborhoods.”

The projects are part of the city’s FEMA-funded $2.2 billion capital improvement program to address New Orleans’ aging infrastructure. The Joint Infrastructure Recovery Response Program began in 2016 and was fast-tracked beginning in 2018. It is implemented by the city’s Public Works department, the Sewerage & Water Board and private contractors.

For the ceremony at Chamberlain Drive and Prentiss Avenue marking the completion of Filmore North Group A, Brossett, Green and Mayor LaToya Cantrell wore masks and stayed at a proper social distance for the ribbon-cutting ceremony that, as a coronavirus precaution, did not include any ribbon or scissors.

Crews have continued with the Joint Infrastructure Recovery Response Program during the COVID-19 shutdowns, with safety precautions in place.

“As we’ve noted recently, while we continue to respond to the COVID-19 outbreak, we also remained focused on our need to improve our city’s aging infrastructure, spend our federal funding on time, get projects completed, and have that infrastructure as sound as possible heading into hurricane season,” Cantrell said on Tuesday.