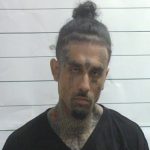 On Wednesday (April 14), the NOPD arrested James Sansone V, 32, in the investigation of an armed robbery and kidnapping incident that occurred earlier that day in the 4900 block of Spain Street.

During the course of the investigation, NOPD Third District detectives learned that the victim had been forced into a vehicle and taken from the 4900 block of Spain Street and brought to a location in the 2300 block of Amonaster Avenue by men who had stolen her purse. She was later returned to the original location.

Through investigation, detectives were able to develop and positively identify Sansone as a suspect in this incident and obtain a warrant for his arrest.

With the assistance of the NOPD’s Violent Offender Warrant Squad, Third District detectives located Sansone, who was apprehended after he attempted to flee. A search warrant was enacted on Sansone’s residence, where the victim’s reported stolen property was located.

Sansone was arrested and booked into the Orleans Parish Justice Center on one count each of armed robbery, second-degree kidnapping and illegal possession of stolen things.

He remained jailed Thursday, and no bond had been set, Sheriff’s Office records show.

Investigation remains active and open in this investigation. Anyone with additional information on this incident is asked to contact NOPD Third District detectives at 504-658-60_0 or call anonymously to Crimestoppers of Greater New Orleans at 504-822-1111 or toll-free 1-877-903-STOP.