The Sidewalk Side: A medley of arts-and-crafts houses on Castiglione Street

Views of the 2800 block of Castiglione Street from the Sidewalk Side. (R. Stephanie Bruno photos)

It is a blistering summer day when I set out to explore the architectural offerings of the Fairgrounds Triangle. The thermometer may read 98 degrees but the “feels like” temperature Is 112. Such is the physical misery we must endure in the New Orleans summer.

I curb my wandering because of the heat and end up in the 2800 block of Castiglione Street, between North Gayoso and North Dupre. Castiglione isn’t a long street. It begins at St. Bernard Avenue and ends at Gentilly Boulevard and the Fair Grounds Race Course.

All of the six homes on the block are early-20th century and represent one style or another of the arts-and-crafts movement. 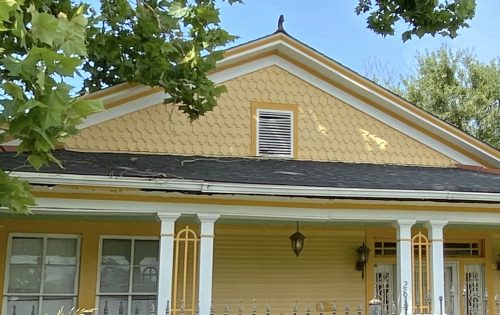 On the first house, I spot fish scale shingles in the wide, front facing gable. Here, the most distinguishing characteristics may be the columns supporting the roof over the front porch. The columns themselves adhere to a pattern seen in arts-and-crafts houses (especially those in the Craftsman style): wood columns atop a masonry pedestal.

Here, the columns are square and slender. They cluster in duplicate on the two center columns and in triplicate on the columns at each end of the porch. The pedestals are painted the same color as the house — like a cool mango freeze (you can see where my head is …) with a single band of red brick on top.

That is not all — each has a semi-elliptical insert between the two forward facing columns. Painted the same color as the body of the house, they stand out against the crisp white trim. Are they purely decorative? Or do they serve as trellises for training vines? Only the homeowner would know for certain, but there is nary a soul stirring on this beastly hot day.

I note as I move forward that this house is the only one on the block surrounded by a fence! At the others, front lawns flow unimpeded to the sidewalk, like a welcome mat. The fence makes the property less approachable, no doubt fulfilling its intention. 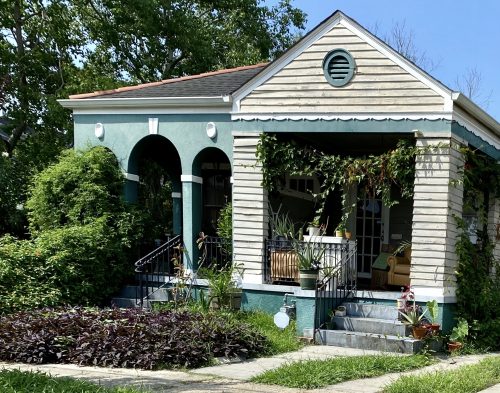 The second house’s split personality is part of its charm. (R. Stephanie Bruno)

I find the next house enchanting. Maybe it is because each half of the double has an entirely different façade: a trio of arches on the left half whispers Mediterranean Revival, while the front facing gable and mitered corners on the columns on the right say Craftsman loud and clear.

Or perhaps it is due to the fact that left half is painted an unabashed blue whereas the right half is a soft yellow? Could it be because of the jaunty scalloped board beneath the gable on the right?

Nope, I figure it is the vegetation complementing the entire composition, not the least of which is the lazy vine that has been trained to stretch across the opening to the porch on the right, continuing onward on a phone line, beyond the walls of the house. Then there is the pair of crape myrtles with deep burgundy leaves between the sidewalk and the street, and a patch of purple ground cover in front. May I be honest? I’m crazy about quirky gardens.

I continue on down the street, my energy beginning to flag beneath the punishing sun, my clothes already soaked through. I realize I need to hurry up if I’m going to finish before I succumb to the heat. 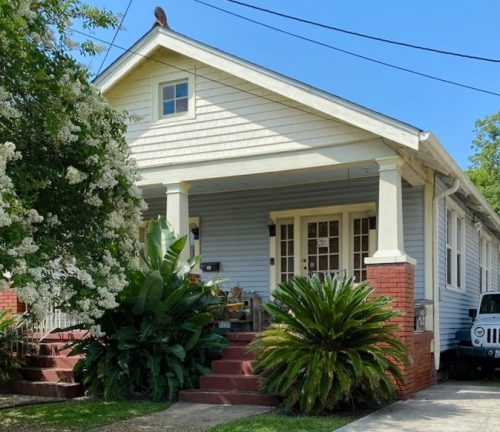 The third house is a classic example of a Craftsman shotgun double. (R. Stephanie Bruno)

Houses three and four on the block are terrific examples of double shotguns in the Craftsman style. Each has a door assembly (a front door flanked by sidelights), battered or flared wood columns atop masonry pedestals, exposed rafter tails, and gable windows.

The house on the left features sago palms flanking two sets of red steps that lead to the front porch, and a giant white bird of paradise between the steps (that’s what I think it is, anyway). I spot a small square gable window divided into four panes each of stained glass. 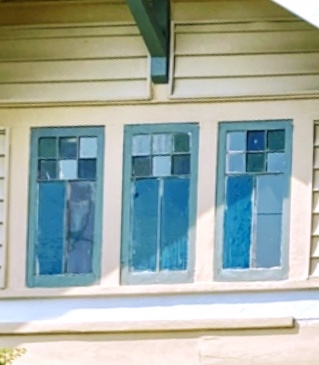 The house on the right is a little fancier than the one on the left: It features three gable windows — tall and rectangular — a transom over the door and sidelights, plus a double front door. Here the battered columns are quite stout and I see angle brackets in the gable.

The gable windows are markedly Craftsman in style — each has six small square panes of glass at the top and two long panes at the bottom, recalling that asymmetry was the battle cry of the arts-and-crafts movement.

Like each house on the block, this one has one or two driveways for off-street parking. In the early decades of the 20th century, developers were building  “automobile suburbs” in the then-far reaches of New Orleans, inspired architecturally by the work of Greene and Greene in Pasadena.

By then, cars were becoming more common, and they were difficult to park in the crowded heart of the old city. So developers went to Gentilly and nearby neighborhoods to design communities that promised spacious modern houses, wider and deeper lots, and driveways and garages for autos. 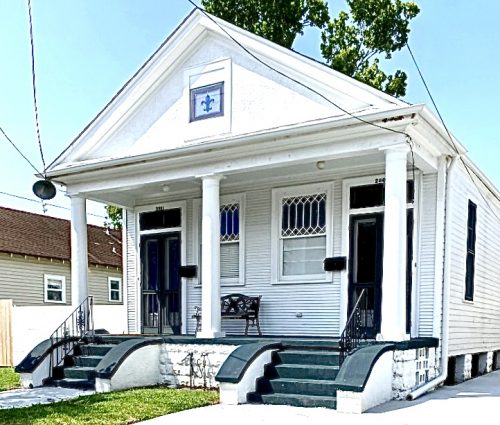 The white double has tall round columns and distinctive windows. (R. Stephanie Bruno)

The sparkling white house (number five on the block) is also a double shotgun, but in what the late New Orleans architect Lloyd Vogt called the “Neoclassical Revival” style. Here the full-length columns are round and stretch from the roof of the front porch to its decking (in other words, they are not on pedestals). 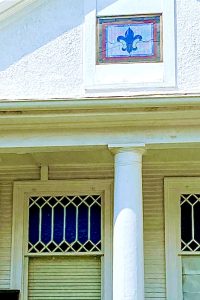 The front facing gable has a slight protrusion at the base, forming a pediment, and the glass doors are doubled. I note the distinctive windows; the top sash is divided into multiple slivers of stained glass in an elongated diamond pattern and the bottom is a single pane. In the gable appears a small square window filled with a milk glass fleur-de-lis.

Just one more house to report on before I melt into a puddle on the sidewalk.

The house at the corner of Castiglione and North Dupre bears very little resemblance to any of the others on the block.

With its arched fan transoms, asymmetrical massing, and roof hipped in all directions, it reminds me of raised basement houses (except without the basement). It fits into the category of arts-and-crafts even if I can’t say precisely where. 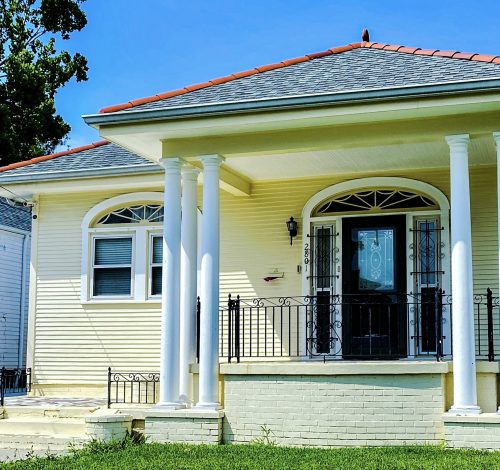 As I walk away, I ponder the mystery that has been bugging me ever since I chose this block. Why was the street named Castiglione? I learn online that Baldassare Castiglione was the quintessential gentleman of the Renaissance era and that his portrait by Raphael is held in high esteem. I also discover there are a few towns named for him in Italy.

These are clues, but they don’t answer my question of how this street near the Fair Grounds got its name. I ask a couple of respected sources on New Orleans history, but they can’t tell me either. So I put the question to you: Whoever is the first to come up with a verifiable answer gets a free large snowball — any flavor, any stand — with my compliments.

New Orleans native R. Stephanie Bruno is a writer, architectural historian and real estate consultant. She is the author of “New Orleans Streets: A Walker’s Guide to Neighborhood Architecture” and serves on the city’s Historic District Landmarks Commission. Her StreetWalker column appeared in The Times-Picayune’s InsideOut section. She can be reached at rstephaniebruno@gmail.com.