Richard Clague’s “Back of Algiers” (circa 1870-73, New Orleans Museum of Art) depicts life in a poorly drained backwater on the edge of the city.

If you go to “Inventing Acadia: Painting and Place in Louisiana,” at the New Orleans Museum of Art, expecting to see lush images of cypress trees reflected in waterways and silhouetted against sunsets, you won’t be disappointed. All that and more is in the exhibition exploring 19th century paintings of south Louisiana.

The exhibit of more than 60 paintings examines the complexity and the historic brutality, as well as the beauty, of Louisiana. The images of land jutting into and surrounded by the marshes, bayous and river deltas speak to the culture as well as the physical environment.

“We think of landscapes as these beautiful images of land,” said curator Katie Pfohl, leading a group of journalists through the exhibit, “but they convey really specific political messages about what land is and who has the right to own it and possess it.”

Louisiana was an exotic place to the 19th century artists who traveled the swamps by pirogue with sketch books in hand. The untamed swamps and forests inspired a genre, and “Inventing Acadia” is the first exhibit in 40 years devoted to these Louisiana landscapes. “Think about yourself as a young painter coming from France, coming from New York, coming from anywhere else and having in your mind what a landscape is,” Pfohl said, “then encountering this insane watery place that’s constantly flooding, filling with water. There’s really as much water as land. To come here is to lose perspective.”

The exhibition acknowledges the harsh realities of Louisiana in the 19th century, including the fact that the subtropical paradise the artists celebrated also was supported by slavery.

Pfohl spent years wading through archives and digging through dusty storage lockers in an effort to include indigenous artists, women and people of color in the exhibition. She found the rare plantation paintings, which were generally commissioned by the plantation owners, that show enslaved people. 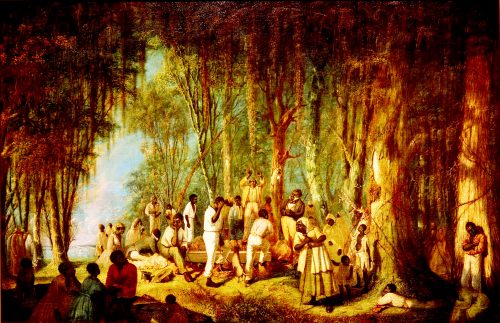 The exhibit displays a collection of baskets woven by indigenous people who lived along the bayous and deltas. The designs reflect their natural surroundings, the flat land and intricate waterways.

“These baskets represent the first landscape representations,” Pfohl said, pointing to “all the serpentine pathways that are evident throughout these works.” Snake images — symbolizing waterways, especially the Mississippi River — can be found throughout the paintings as well as the baskets.

The exhibit also confronts the forced displacement of indigenous people and “the price this region has paid and continues to pay in the vast, really complicated, really difficult history,” Pfohl said. Any exploration of Louisiana landscape has to confront another displacement: the fact that much of the land so idyllically rendered is no longer there.

In the Great Hall at the entrance to the museum, massive panels depict south Louisiana as it appears now. Artist Regina Agu spent the past six months traveling by water from the Gulf of Mexico to Louisiana’s lakes, rivers, levees and canals. She photographed the same sites the 19th century artists painted to create the dreamlike “Passage.”

“Passage” is made up of huge panoramas that, Pfohl points out, also have a tie to the 19th century artists. Many of the exhibited painters created panoramas that were rolled on a crank and shown in early prototype cinemas on Canal Street, letting city dwellers experience the swamplands outside New Orleans.

During her journey, Agu tracked down the exact spot Joseph Rusling Meeker painted in “After a Storm—Lake Maurepas,” seen below. The painting appears on the cover of the exhibit’s comprehensive catalog, and the book’s end paper shows what is there now — nothing but water. Joseph Rusling Meeker, “After a Storm—Lake Maurepas,” (1888, Louisiana State University Museum of Art) shows a serene landscape that had been destroyed by the time it appeared on canvas.

Even as Meeker’s sultry scenes were emerging on canvas — before oil and gas pipelines, before the national levee system, before climate change — the land was disappearing.

Meeker’s paintings of Louisiana were created from sketches he made while traversing the waterways as a Union soldier during the Civil War. Though there’s no evidence he ever returned to the state, Meeker spent the next three decades painting and selling atmospheric images of Louisiana from those 1860s sketches.

“At the time Meeker made a lot of his paintings, many of the landscapes no longer existed,” Pfohl said. Vast tracts of Louisiana were deforested in the late 1800s as new technology allowed loggers to reach deep into the swamp and extract the cypress trees, leading to dramatic land loss.

The marshland of south Louisiana was generally seen as having little value at the time these artists ventured into the swamps, bayous and riverways. “They were not seen as a place to go to, let alone paint,” Pfohl said.

The popularity of the paintings, often showing a brooding but idealized view of the land, followed the popularity of Henry Wadsworth Longfellow’s romantic epic poem “Evangeline.” The Louisiana swamplands gained value and prominence in the popular culture of the time.

“They’re incredibly beautiful landscape paintings, and I think all of us have a very complicated emotional, political and social responses to landscape — all these different memories and feelings,” Pfohl said. “And that’s as true in the 19th century as it is today.”

You can view “Inventing Acadia: Painting and Place in Louisiana” until Jan. 26, and Regina Agu’s “Passage” is on display until Feb. 10.