Social media guru Eileen Carter and community organizer Belden “Noonie Man” Batiste grew up on the opposite sides of New Orleans. While it’s easy to think of them as an odd couple, they’re really a perfect match. Batiste, who was trained in grassroots organizing by Treme living legend Jerome “Duck” Smith, verbally attacked Carter’s sister Karen Carter Peterson at a political forum a few years back when both were running for Congress.

Yet the spontaneous, organic, people-powered movement Carter and Batiste launched together last week has a chance to force a recall election of Mayor LaToya Cantrell.

The campaign, which is in the early stages of organization, offers an easy-to-navigate website (noLatoya.org), detailed instructions on how to download the petition and what information is needed for anyone who wants to sign it. There is also an opportunity for people to join the site’s mailing list, volunteer their services or even host a petition signing “party.” The website includes a feature that counts down the days until the campaign ends, Ash Wednesday 2023, and how many signatures have been turned in.

There are several things that make this campaign unique and could give it the lift needed to succeed.

First of all, Mayor Cantrell somehow continues to anger more than a few of her constituents, and that number keeps growing. Voters of all stripes are frustrated about escalating crime, lack of police, victims’ rights, high utility bills, blight, super-size potholes, impassable streets, and the mayor’s penchant for first-class travel. Every few days, anger grows as a new negative story highlights yet another indiscretion.

Participating in the recall petition campaign is a simple, no-cost way for citizens’ voices to be heard. It empowers people and gives them a sense of control when it seems like everything else is out of control.

Second, after spending countless hours on our computers while staying home during the pandemic, we have all become more tech savvy. Most people don’t blink an eye when asked to download a recall petition for family, friends and neighbors to sign.

Fourth, much of the mainstream media have soured on Cantrell. Yes, they still cover her positive announcements like the hiring of former New York City patrol chief Fausto Pichardo to work with NOPD operations. But the tone of coverage has changed from the first term. Now reporters and editors are digging deeper and asking more pointed questions. The City Council’s ongoing inquisition of Cantrell has given the media addition fodder, which in turn has shone a harsher light on her honor.

Fifth, there’s the issue of race, which plays into everything in cities like New Orleans. After several days of silence, Maggie Carroll, Cantrell’s long-time campaign manager and confidant, threw down the race card, calling the recall campaign an attack a Black woman secretly supported by Republicans. Carter was quick to point out via a tweet that she and Batiste are both Black and that the campaign has not accepted any funds. Since the majority of earliest petition supporters signed up in Lakeview, it possible that many were White and members of the Republican Party. But there were Black voters in the lines, too, and Black activists such as former political candidate Byron Cole are sponsoring signing parties.  Black females have always been Cantrell’s base. If and when lots of Black women start hosting signing parties, we’ll know the recall campaign is cresting like the Mississippi River at flood stage. 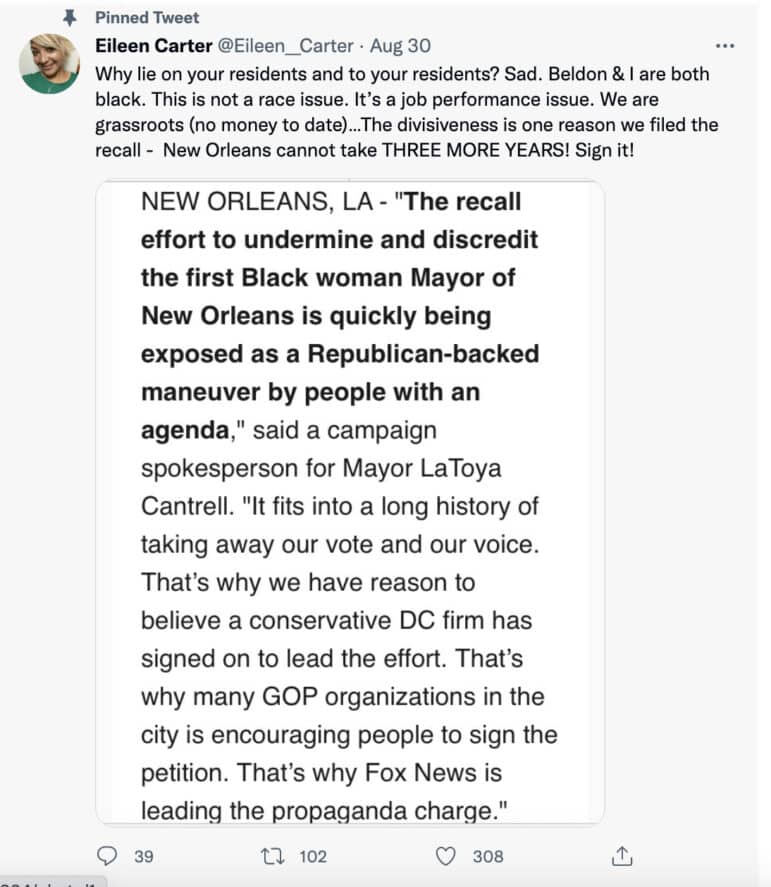 Whenever I want to know what New Orleanians really think about a hot topic, I look no further than Nextdoor. On that social media site, the recall campaign is in high gear. People are venting their feelings about the mayor and life in New Orleans. They are asking how to participate in their particular neighborhood. Others are providing links to the Secretary of State’s website to download petition documents. Victims are chiming in about being re-victimized by Cantrell’s actions in Juvenile Court. Some people are posting about the recall campaign every day. They have become the foot soldiers in a grassroots army that organically came together to tell and retell this story.

“Right now, the effort to recall Mayor LaToya Cantrell is energized and is ahead of pace in collecting the requisite number of signatures from registered voters,” said Dr. Edward E. Chervenak, director of UNO’s Survey Research Center. “The recall operation needs to average 350 signatures per day over 180 days to reach their goal of 63,000 signatures. As of now, after only six days, the recall campaign has accumulated approximately 3,310 signatures, for an average of 521 signatures per day.

“The question is whether that energy and pace can be sustained over time. That question will most likely be answered by how the mayor responds” Chervenak continued. “If the mayor cannot change the perception that she is out of touch and is not up to the task of running the city, this will only add fuel to the movement to recall her. If she can transform how the public perceives her, then she may be able to hold off the effort to recall her from office.”

The organizers are seeking 10,000 more than the required 53,000 signatures to allow for a margin of error. Gathering 63,000 signatures of Orleans Parish registered voters won’t be easy. It will require a campaign manager with a large budget to methodically canvass neighborhoods with high voter frequency. It will require dozens of volunteers to work fairs, festivals, churches and football games. All the while Cantrell will be pressuring voters, especially those who work for the city or receive city grants or contracts. Batiste said some culture bearers have already gotten the message that supporting the recall campaign could have unpleasant consequences.

In addition to Byron Cole’s signing event in the 7th Ward on Friday (Sept. 2), signing and petition drop-off opportunities scheduled for Saturday (Sept. 3) include Marsalis Harmony (formerly Palmer) Park at Carrollton and Claiborne; Nita’s New Orleans East Signing Party, 9999 Lake Forest Blvd.; and in Algiers at 4001 Gen. de Gaulle Drive.  On Sunday (Sept. 4), registered voters in the Lakeview area can drop by 6830 Canal Blvd. NoLatoya.org has a complete list of future events where registered voters can sign or drop off petitions.