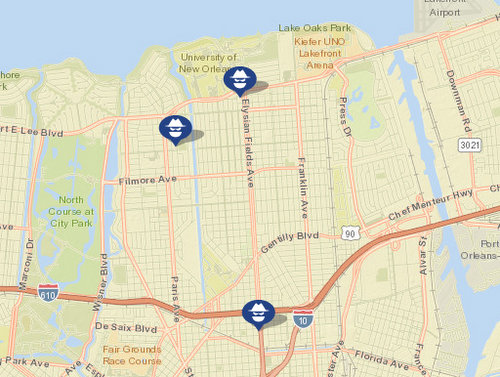 A customer at Waffle House on Elysian Fields shot a robber in the restaurant Thursday night, less than an hour after a similar robbery at Burger King, New Orleans police said.

In a separate case earlier in the day, a woman putting a car seat into her vehicle was the victim of a carjacking attempt by a child younger than 12 on Chatham Drive, police said.

The pair of restaurant robberies started shortly before 9:30 p.m. Thursday, April 19, at the Burger King in the 6300 block of Elysian Fields, when two armed men entered from a side door, according to initial NOPD reports.

“One subject grabbed an employee and made the others get on the floor,” the report states. “The other male subject went to the back of the store with the manager and made her open the safe. The subjects fled with six register drawers containing cash.”

Just before 10:15 p.m., the scene repeated itself at the Waffle House in the 2900 block of Elysian Fields, when two men entered with handguns, the second report states. One of them jumped over the restaurant counter and demanded money and cell phones, but as they left with the money, a customer in the restaurant shot at them, the report states.

Shortly afterward, a man identified as 19-year-old Ernest Scott showed up at a hospital for treatment in a private vehicle, and police initially called him as a “person of interest” in the robbery. Later Friday afternoon, however, NOPD spokesman Gary Scheets issued a correction stating, “There is no person named Ernest Scott under investigation in relation to this incident.”

The carjacking attempt took place much earlier in the day, shortly before 6:30 a.m. in the 5700 block of Chatham Drive. A woman in her 40s was putting a child seat into her car when a boy she described as no older than 12 approached her from behind and demanded she back away from the car, the report states.

The boy jumped into the car, but the engine shut down, and he got out and ran away on foot, the report states.

Further details were not immediately available in any of the above cases. Anyone with information is urged to call the NOPD Third District station at 658-6030 to speak to a detective, or CrimeStoppers at 822-1111 to leave an anonymous tip that could be eligible for a cash reward.