Women’s Half Marathon to close streets near City Park, lakefront on Sunday

The inaugural Women’s Half Marathon and 5K will begin and end in City Park on Sunday, March 10, in front of the New Orleans Museum of Art. Start time is 7 a.m., with an 11 a.m. finish. 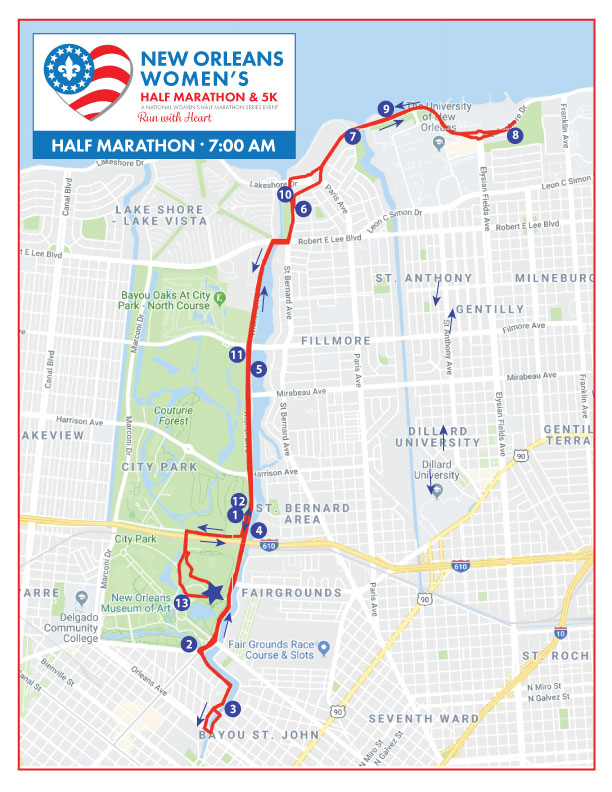 Traffic will be restricted along the route depicted above until the last participant passes and course materials are removed. Roads along the route are expected to reopen within the following timeframes:

The city will track the beginning and end of the half marathon as it progresses along the route in real time at routewise.nola.gov.

The City Park streetcar line may be delayed due to runners crossing tracks. Additional routes will experience delays or detours during the event, including but not limited to Lines 48, 32, 91, 90, 55, 51, 52, and 60. All RTA service alerts, updates, and detours can also be accessed by downloading the RTA’s GoMobile app. To learn more, visit www.norta.com or call Ride Line at 504-248-3900.

The inaugural New Orleans Women’s Half Marathon and 5K has attracted more than 2,000 registered runners from 47 states and three countries, the event website says. The race’s organizers promise: “Athletes will traverse past some of the most beautiful communities in New Orleans with a picturesque course that will finish in the heart of City Park.”