Changes are in the works for Gentilly Resilience District, and the city wants your input 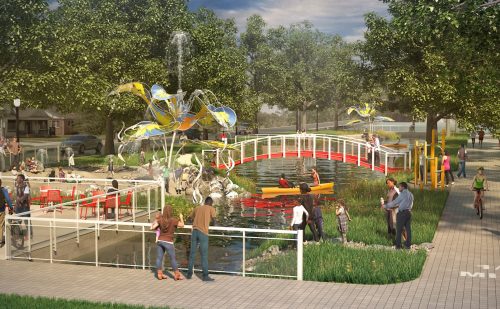 Rendering of a completed Blue and Green Corridors project in Gentilly.  (via Gentilly Resilience District)

The city plans to reallocate some of the federal dollars flowing into the Gentilly Resilience District. The money would affect an array of green developments, including the Blue and Green Corridors, Dillard Wetlands, Mirabeau Water Gardens, St. Anthony Green Streets and the Community Adaption Program.

The funding for these projects comes from a $141 million U.S. Department of Housing and Urban Development block grant. With federal dollars, any redistribution needs public outreach and public input.

The city’s Office of Community Development held a forum on Jan. 11 with a public comment period ending Jan. 22. Apparently, public response was limited, for it has now scheduled an additional virtual public hearing for Thursday (Feb. 4) at 6 p.m. and has extended the comment period to 5 p.m. Monday, Feb. 22.

At issue is the National Disaster Resilience Action Plan Substantial Amendment 1, which proposes to reallocate $13.8 million in funding between projects and programs.

For example, about $2.4 million could be reallocated from the Blue and Green Corridors project, with approximately $332,000 going to the Dillard Wetlands, $1 million to St. Anthony Green Streets, $606,000 to the Mirabeau Water Gardens and $263,000 to the Community Adaptation Program, according to a city presentation on the plans. 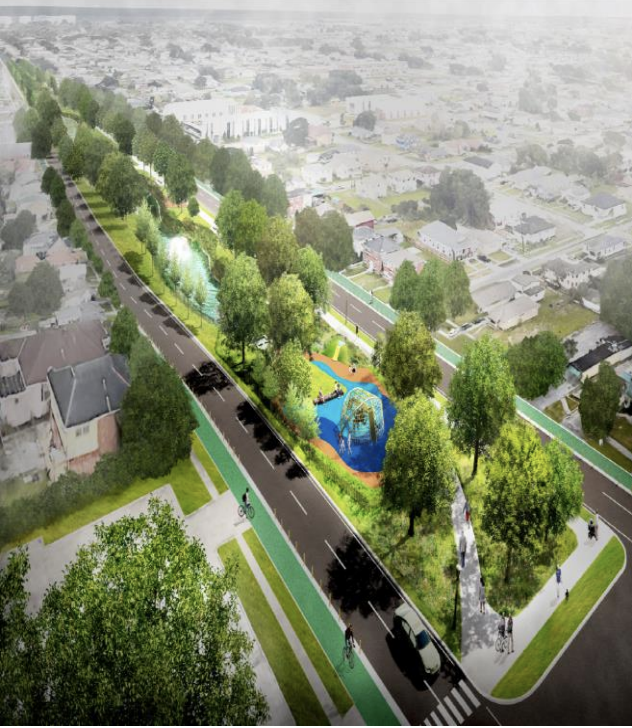 Elysian Fields Avenue as a “blue corridor.” (via nola.gov)

The “blue corridor” in the Blue and Green Corridors project will be Elysian Fields Avenue, made blue with an addition of circulating stormwater storage in the neutral ground. The Robert E. Lee Boulevard neutral ground, the “green corridor,” will receive landscaping enhanced for energy efficiency and stormwater management. Walking and biking trails will also be added or enhanced.

The design work for this project is nearly complete, and construction is expected to begin in the first quarter of this year and last until the second quarter of 2022.

The plans for this project remain intact, city officials say. “These were moneys that were identified through city efficiency that we could push into construction,” said Mary Kincaid, the city’s sustainable infrastructure project manager. “No project is being taken away from.”

The proposed changes, Kincaid said, are “not an ‘either/or’ but an ‘and.'”

The Dillard Wetlands are 27 acres donated to the city by Dillard University, across the London Avenue Canal from the historic Dillard campus and bordering the former Gregory Junior High School site.

“We are going to take this little known green parcel and create an urban forest space, which is something that is very scarce,” Kincaid said at the January forum. “We’re taking this site, which is currently not in public use, and creating an outdoor classroom and walking trails. And we are also going to be doing some planting and improving the biodiversity of the site. That will encourage the overall health of the project.”

The streets will receive green improvements, Kincaid said, and will be resurfaced through the leveraging of some FEMA funds. 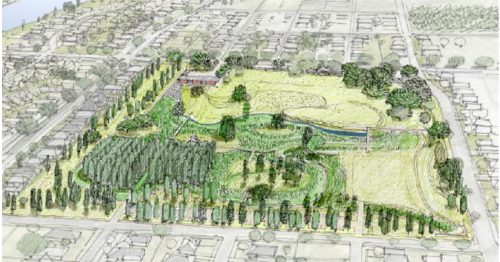 The city was granted 25 acres of green space in Gentilly to create the Mirabeau Water Gardens. Buildings for enhanced public education are now planned for the site. (via nola.gov)

The Mirabeau Water Gardens project is on 25 acres donated to the city by the Sisters of St. Joseph after Hurricane Katrina. The open site will be transformed into a recreational and educational space designed to reduce flood risk. Plans include interconnected lagoons to retain stormwater as well as walking paths and play areas.

“NDR is going to be adding buildings and adding programming, so there is an action you can take away to your own property to reduce stormwater runoff and be aware of climate risk,” Kincaid said.

That is also the goal of the Community Adaption Program, a residential assistance project focused on helping low- and moderate-income homeowners retrofit their property to improve stormwater management. It received a 2020 EPA regional award for the Outstanding Green Infrastructure Professional Project.

The Gentilly Resilience District includes a combination of  projects across Gentilly designed to reduce flood risk, slow land subsidence, improve energy reliability and encourage neighborhood revitalization. Construction will begin in 2021 and, when complete, is designed to provide more than 20 million gallons of stormwater storage for the Gentilly neighborhood.

Written comments can be sent to Office of Community Development at corcherrie.allen@nola.gov by 5 p.m. on Feb. 22 or submitted via the comment card here.

At the end of the comment period, all comments will be incorporated in a Responses to Public Comment document and submitted to HUD for approval as part of Amendment 1. The public comments and responses will be posted on the city’s website here.