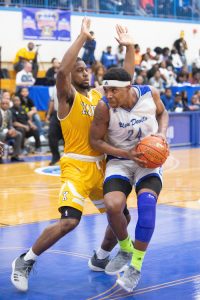 See a video from the men’s Bleu Devil Classic matchup between Dillard and Xavier here.

The matchup was the 143rd meeting between the two teams and the second this year. Dillard fell to Xavier on Jan. 26, 76-83.

The teams were evenly matched at halftime, Xavier leading 37-36. The Bleu Devils, however, outscored the Golden Nuggets 45-33 in the second half.  Xavier struggled with field goals, making only 22 of 70 (31.4 percent). Dillard shot less, but were more efficient, making 25 of 49 (51 percent).

Dillard takes on Talladega College in Talladega, Alabama on Monday, Feb. 18. Xavier takes on Rust College at home on Monday. 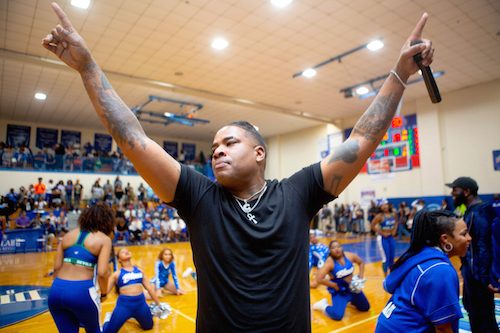 Choppa stops by to entertain the crowd at the Bleu Devil Classic. (Sabree Hill, courtesy of Dillard University)