Dillard University’s eighth president will take the reins in July 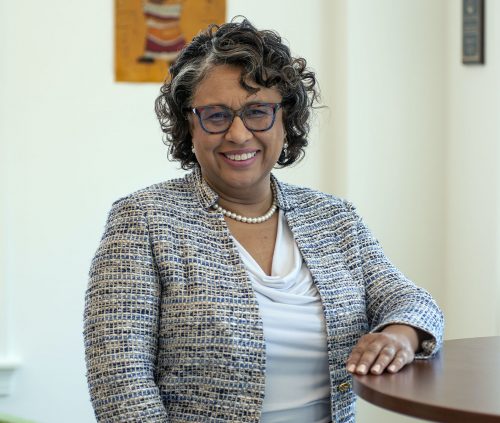 Dillard University has announced its eighth president will be Rochelle L. Ford, currently the dean of Elon University’s School of Communications. Ford will assume her role as president July 1.

At Elon she leads more than 80 faculty and 1,500 students with six undergraduate major programs of study and one graduate program. Ford is a 2021 fellow in Clark Atlanta University’s HBCU Executive Leadership Institute.

She will succeed Dr. Walter Kimbrough, who led the university to unprecedented growth during his decade at the helm. During his tenure, the endowment grew by more than 115 percent, placing it among the top endowments among all historically Black colleges and universities (HBCUs).

Dillard’s academic profile also increased under Kimbrough with the introduction of two signature programs, physics and film studies, and the restructuring of its nursing school to the College of Nursing. The university has steadily seen increases in its retention and graduation rates since Kimbrough became president in 2012.

Kimbrough will leave the university in a good position for continued growth, said alumnus and board chairman Michael D. Jones. “I am excited about Dillard’s future as we enter this next era of leadership,” Jones said.

Having built a robust resume in higher education administration and instruction, incoming President Ford has a reputation as a hard-working transformative leader. Her scholarship and experience include diversity, equity and inclusion, public relations, advertising, journalism and media.

“Dr. Ford is a dynamic, charismatic and visionary leader,” Jones said. “Students, faculty and trustees were blown away by her insight, passion and drive. As impressive as Dillard has been over the past 150 years in producing history makers and change agents, there is no question that, under Dr. Ford’s leadership, the best is yet to come.”

Phyllis Worthy Dawkins, executive director of the HBCU Executive Leadership Institute, recalls Ford as an “outstanding fellow” from the institute. “The way she grasped what we were doing in terms of competencies, let us know that Dr. Ford would become a president. Her colleagues also saw that she had the disposition and knowledge to succeed in a presidential search.”

Before entering her role at Elon, Ford served as Syracuse University’s provost faculty fellow, implementing its strategic plan. She also served as the chair of the public relations department in the S.I. Newhouse School of Public Communications. Prior to Syracuse, she helped establish the Academic Center for Excellence at Howard University and served as the associate dean of research and academic affairs in Howard’s School of Communications.

“I feel very blessed and honored to be selected to service Dillard University, which is a national treasure committed to producing leaders who live ethically,” said Ford. “Dillard’s alumni think precisely and act courageously to make the world a better place. I aim to continue that legacy and ensure the sustainability of Dillard for generations to come.”

The following are some of Ford’s accomplishments:

•  The second dean in the history of Elon’s School of Communications, Ford increased student enrollment approximately 15% between 2018 and 2021.  Among many factors, Ford credits relationship-rich, engaged learning for the school’s enrollment success.

•  With the recommendations of the School of Communication’s Faculty Technology Committee, Ford made strategic investments in her unit’s technological infrastructure, including creative software, establishing video distribution through OTT, providing media analytics and social listening tools, enhancing video over fiber optics and audio over IP, updating and increasing camera coverage for Elon Athletics and Elon Sports Vision, and branding through digital signage in addition to other resources.

•  At Elon, she led a reorganization of the academic departments to provide students with more access to administrators, improved faculty and student mentoring and strengthened academic curriculum and industry partnerships. Ford also hired more than 10 full-time faculty and more than 10 part-time instructors.

Among Ford’s numerous publications are “Administrative Challenges and Organizational Leadership in Historically Black College and Universities” and “Setting a New Agenda for Student Engagement and Retention in Historically Black Colleges and Universities,” both co-authored with Charles B.W. Prince. Ford was an editor of “Reality TV: Entertaining… But No Laughing Matter”, a 2017 white paper that examined the impact of media images, particularly on African American women.

In 2021, the Arthur W. Page Society presented Ford with the Distinguished Service Award for her service to the public relations profession and her commitment to advancing diversity, equity and inclusion in the field. That same year, ColorCOMM listed her as one of 28 Most Influential Black Females in Communications. In 2019, Ford received the Public Relations Society of America’s (PRSA) Outstanding Educator Award; and, in 2018, Ford was inducted into the PRWeek Hall of Fame.

Active in both her discipline and her community, Ford is a member of PRSA, where she holds an Accreditation in Public Relations. She is also a member of the National Black Public Relations Society, the Arthur W. Page Society, the American Advertising Federation, Zeta Phi Beta Sorority Inc., the Alamance County Chamber of Commerce’s Diversity and Inclusion Committee, and the United Church of Christ. Dillard is affiliated with the United Church of Christ as well as the United Methodist Church.

Ford will be the second woman named Dillard’s president in a permanent capacity. Dr. Bettye Parker Smith served as interim president 2004-2005, and Dr. Marvalene Hughes served as president from 2005 to 2011.