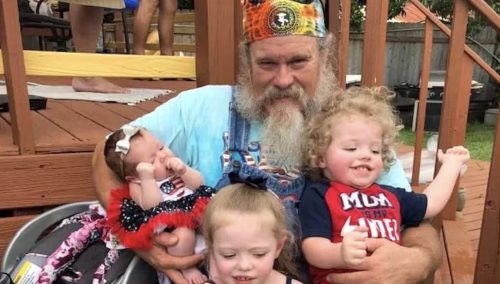 A homeowner was shot four times Monday afternoon (May 23) while trying to protect his wife from intruders at their home on St. Roch Avenue in Gentilly Terrace, according to the couple’s son.
Joe S. Cooper is in intensive care struggling to recover from the bullet wounds, his son Doyle Cooper stated Tuesday on a GoFundMe page. At a press conference Tuesday morning, Leslie Cooper said her husband’s condition had been upgraded from critical to serious.

The New Orleans Police Department reported that a man fired shots while at the door of the victim’s residence in the 4400 block of St. Roch, near Gentilly Boulevard, at about 3:50 p.m. The gunman had fled by the time the Third District officers arrived.

Leslie Cooper provided further details at the press conference. She said a man had come to their door at about 3 p.m. looking for package, saying a tracker had placed it at their address. She told him they hadn’t received any packages.

The man got angry, saying he didn’t believe her. Her husband came outside, and the man walked off.

He came back later with another man in a white sedan and banged on the door. When Joe Cooper opened the door, they started to push him aside. Cooper yelled to his wife to take cover and tried to shove them out the door, but they took him with them.

“At that point,” Leslie Cooper said, “there were multiple rapid gunshots.”

Joe Cooper was shot twice in his right lung and once in each leg. He also has liver laceration from the shooting.  The Emergency Medical Service took Cooper to the University Medical Center, providing a blood transfusion on the way.

“He was protecting me,” Cooper said, through tears. “He said, ‘That’s my job.’ People say they will take a bullet for you — well, he took four.”

Leslie Cooper volunteers as a WWOZ deejay, hosting the Tuesday morning traditional jazz program, and works as the music coordinator for Buffa’s on Esplanade Avenue. Doyle Cooper, 29, is a jazz trumpet player and band leader.

Doyle Cooper said he is afraid for his parents to move back into their home. “The sanctity of their house was breached,” he said. “You know, you see the numbers on the news. You feel bad for the families, but you never think that it would actually happen to you or to the ones you love. Just seeing that house — there’s 13 bullet holes in their walls.”

The Coopers are also asking people to donate blood in Joe Cooper’s honor.