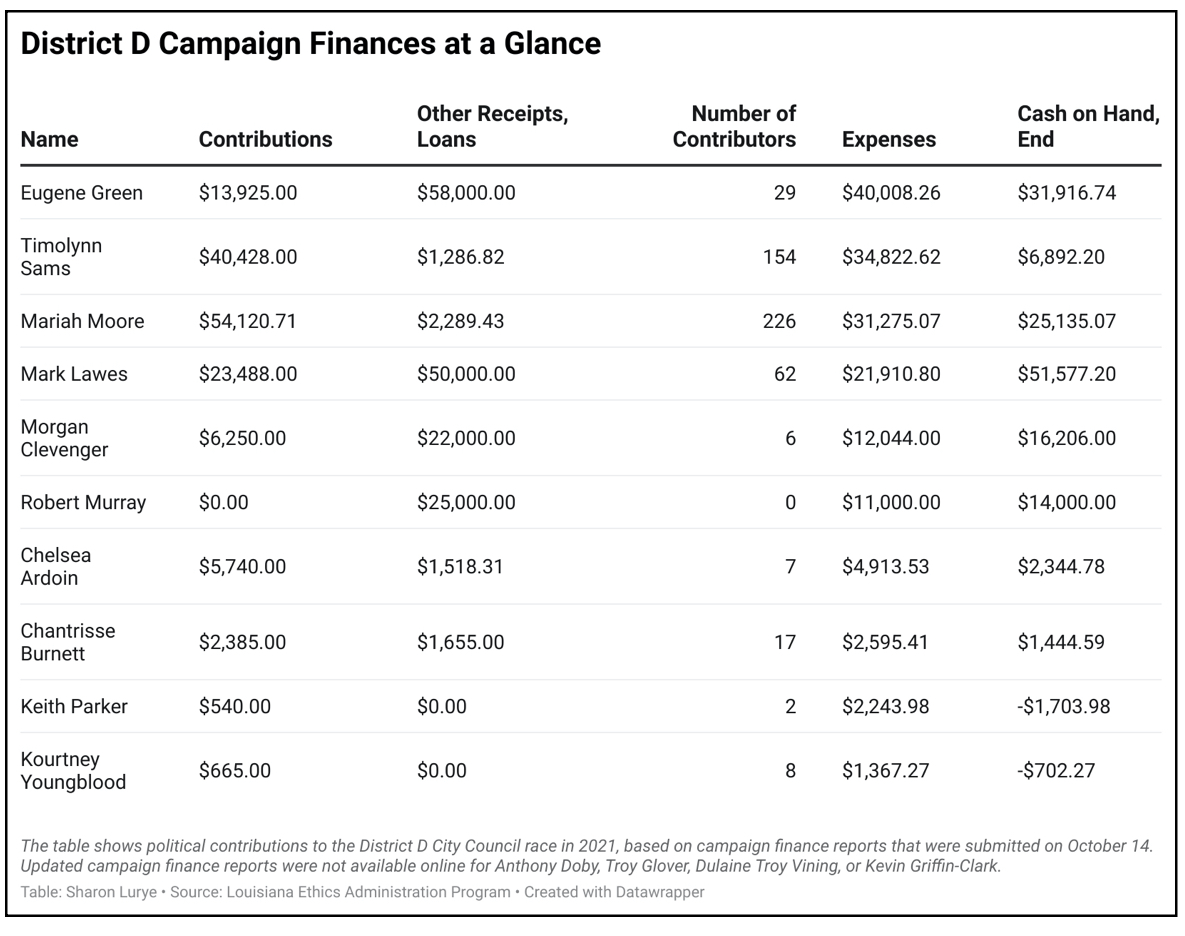 There’s a crowded field of 14 candidates jostling to win the City Council seat for District D in the upcoming election, but none of them appear to have an overwhelming advantage in terms of campaign spending, according to the latest campaign finance reports filed the Louisiana Ethics Administration Program.

The reports, filed on Oct. 14, show that the candidates have raised over $145,000 in donations and spent over $160,000. Eugene Green is the biggest spender in the race with over $40,000 in campaign expenditures, followed by Timolynn Sams, Mariah Moore, and Mark Lawes. Green has mostly had to rely on his own green, however, as he’s loaned himself $58,000 to fund the race.

The candidates who have raked in the most donations are Mariah Moore with over $54,000 in contributions, followed by Sams again and Mark “Johari” Lawes.

The seat for District D is wide open as current Councilman Jared Brossett is term-limited and running for one of the at-large seats in the Council. Those plans may be in jeopardy, however, as Brossett was arrested Monday on drunken driving charges.

To find out who’s funding each of the candidates in the District D race, read on. 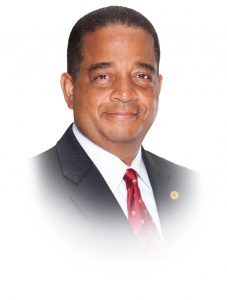 Eugene Green’s biggest benefactor is himself, as he’s funding his campaign largely with a loan of $58,000 that he gave to himself on June 28. A Realtor and the former chief of staff for Congressman William Jefferson, Green told Gentilly Messenger that his first priority would be building more affordable housing in New Orleans.

Green also raised $13,925 in campaign donations from 29 sources. His biggest donations were:

Green, who holds an economics degree from Harvard and an M.B.A. from Tulane, must have learned the value of big spending. His expenses total $40,008.26, including $13,691.11 that went to Printers Wholesale Group, $7,905 to Orgena Enterprises for advertising, $6,093 to Brown Public Relations for advertising, and $4,000 to Sandra Green Thomas for outreach.

Sams is an executive at the charter school network InspireNOLA, which includes McDonogh 35 High School in Gentilly. She also hosts the radio talk show Pumps, Pearls and Politics, which focuses on issues that affect women of color in the Deep South.

The biggest contributors to Sams’ campaign were:

Other notable contributions include $2,249 from Onyx Media Group in Miami and $1,500 from Elizabeth Monaghan of Uptown.

Social justice activist Mariah Moore is a national organizer at the Transgender Law Center and executive director of the House of Tulip, an organization that is raising funds to build a shelter and community center for transgender people. One of her campaign priorities is affordable housing, she told Gentilly Messenger. If elected, she would be the second openly transgender woman elected to political office in Louisiana, after Peyton Rose Michelle of Breaux Bridge.

Moore has put her experience in fundraising and organizing to good use, as she’s brought in $54,120.71 in political contributions from 226 sources, the most donations of any candidate in the District D race. 164 of those donors gave $200 or less.

The contributors who donated the maximum amount, $2,500, were:

Her biggest expenses include $14,654.08 to Red Cypress Consulting; $8,000 to her campaign manager Vincenzo Pasquantonio; $1,650 to Bruce Gallassero for campaign compliance and reporting services; and $1,320.21 to ActBlue in service charges for online donations and access to campaign software. After $31,275.07 in expenses, she’s left with $25,135.07 cash on hand.

Mark Lawes, owner of Half Shell on the Bayou restaurant, brought in $23,488 in campaign contributions from 62 sources and loaned himself $50,000. Lawes is father to two state troopers and two NOPD officers, according to his campaign website, and says that he supports community policing and increasing economic opportunities.

His top contributor was Ray Landry of Gonzales, who gave $2,500. He also got $1,500 each from Keith Saia of Elmwood; Lenora Marrows, whose address matches Morrow’s Restaurant in Marigny (this could be Morrow’s co-owner Lenora Chong, who ran Lenora’s Grill in Pontchartrain Park); Dustin Ebanks, owner of the Macro Group behavioral health center of Monroe; and Harold Cade of Metairie.

The remaining 10 candidates have raised a little over $15,000, but they have supported the city’s economy — especially the printing and yard sign industry — by spending more than $34,000. Here’s the breakdown of their bank accounts: