Suspect arrested in fatal stabbing of woman in Gentilly Woods 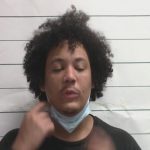 The NOPD arrested Alvin Severin Jr., 19, in the investigation of a homicide on Monday (July 19) in the Gentilly Woods neighborhood.

At around 5:05 p.m., Third District officers were notified about a person in need of help in the 5000 block of Debore Circle. Upon arrival, officers discovered Alliyah Staes suffering from multiple stab wounds.

She was pronounced dead on scene by medical responders, and the NOPD changed the classification to a homicide. Staes was 19.

Officers apprehended an adult male, later identified as Severin, at the scene. Police say he was arguing with the woman before the stabbing occurred.

Detectives obtained an arrest warrant on a charge of second-degree murder. Severin was arrested and booked into the Orleans Parish Justice Center.

Anyone with additional information on this incident is asked to contact NOPD Homicide Unit Detective Thaddeus Williams at 504-658-5300.

This post was updated on July 21 with the name of the victim.