The New Orleans Police Department has released photos from surveillance video of the armed robbery of the Boost Mobile store on Saturday (May 7) at 3120 Gentilly Boulevard.

According to investigators, the man shown in the photos entered the business, produced a large black semiautomatic pistol, and demanded money from both cash registers. The gunman fled the location with with $521 in cash and some unspecified merchandise.

Police said he was wearing a black hoodie, gray jeans, white shoes, a yellow mask over his nose and mouth, a yellow glove on his right hand and a black glove on his left hand. 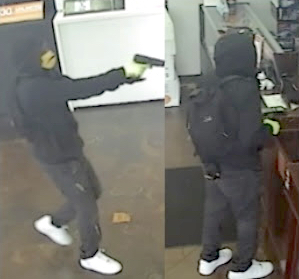