Viewpoint: Will Interim Superintendent Michelle Woodfork be able to make a difference? 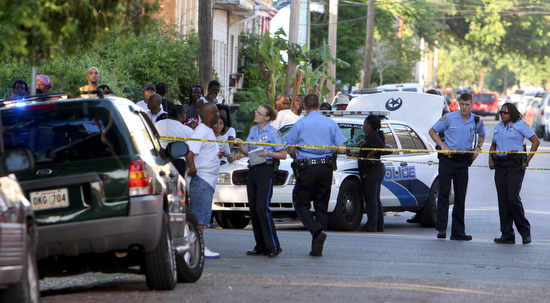 Police investigate the scene of a shooting.

The citizens of New Orleans are shell-shocked, no pun intended, by the highest homicide rate in more than 25 years. Armed robberies have also skyrocketed. Numbed by the ongoing crime wave, residents are no longer surprised when they hear gunshots.

After multiple shots rang out last Friday afternoon (Dec. 23) at Rouses on Baronne Street, people across the city were astounded by the brazen act of violence that took the life of comedian and social media sensation Brandon “Boogie B” Montrell.

On Christmas morning, a 16-year old was injured in a Central City shooting. Then two young adults — nursing student Courtney Hughes and Kyron Peters — were killed and four more injured during a Christmas night mass shooting in the Lower 9th Ward.  It was the city’s 10th mass shooting in 2022.

On Tuesday (Dec. 27) at 8:30 a.m., another man was killed in the Warehouse District. Yesterday morning (Dec. 28), a man was shot and killed in Old Aurora on the West Bank. In the afternoon, another victim was killed in the French Quarter. In that incident, a suspect was quickly captured. The shooters in almost all of the other incidents are still at large and probably armed and quite dangerous.

With 277 murders already reported in 2022 and the popular New Year’s Eve/Sugar Bowl weekend about to begin, new NOPD Interim Superintendent Michelle Woodfork — who only took the oath of office on Dec. 22 — had to hit the ground running. Even though Woodfork grew up in the NOPD’s embrace as the daughter of a police officer, niece of the city’s first Black police chief and someone who has served on the force more than 20 years, she clearly has her work cut out for her.

While the Woodfork name is recognized and respected by older New Orleanians and Michelle Woodfork is liked by the rank-and-file, she is not considered “one of the boys.” She has never commanded a police district but now has to set her goals and build trust with her captains to execute them.

She is also leading a department where morale is so low that many seasoned officers have reportedly said they want to leave as soon as their new bonuses arrive. Officers will also be watching to see whether Woodfork stands up for them whenever problems arise from the department’s internal deficiencies. Morale-building should be at the top of Woodfork’s list of priorities. 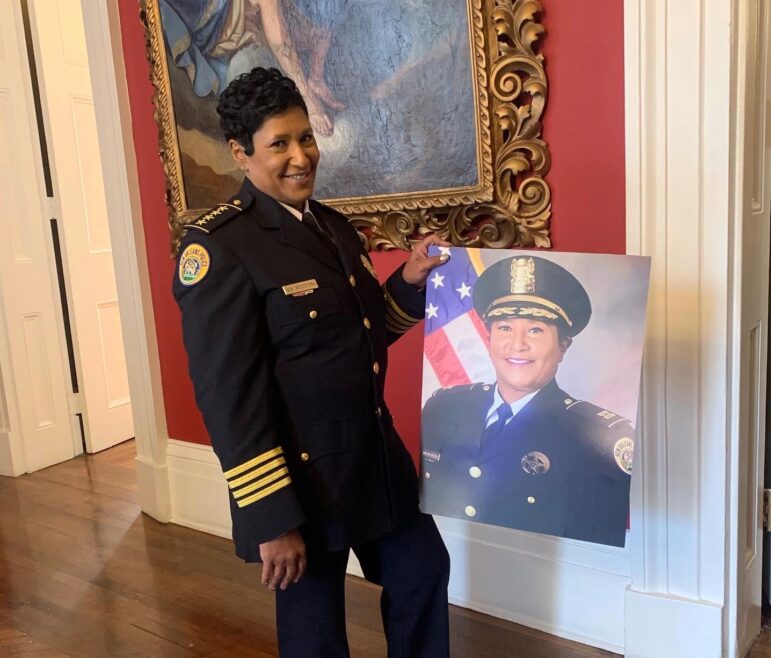 Interim Superintendent Michelle Woodfork holds up her official photo after she is sworn in Dec. 22 at Gallier Hall.

With shootings, robberies or carjackings occurring every day, Woodfork is sitting on a ticking time bomb. She has announced that 25 Louisiana State Police officers will be deployed downtown this weekend alongside NOPD officers. Hopefully, this extra help will reduce the number of crimes committed against locals and tourists during the busy holiday weekend. Perhaps Woodfork should continue paying for extra help from the State Police until more officers are hired and trained.

Woodfork also has the support of several well-compensated hired guns including consultants John Linder and his team, former New York Police Department brass Fausto Pichardo and Thomas Conforti. They allegedly have been paid $1 million for their efforts during the first six months and are lobbying to extend their contract. The consultants have not revealed exactly how the first million was spent. It is expected that Pichardo will continue to call the shots for the NOPD behind the scenes. He roundly praised Woodfork at a press event last week.

According to a report from the city’s independent police monitor, Woodfork was also among the NOPD officers who allegedly, on their way to lunch, joined then-Councilman Jay Banks, a Cantrell ally, and his driver at the home of Belden “Noonie Man” Batiste for an ill-fated confrontation that Batiste has characterized as an attempt at intimidation. Batiste, a leader in the campaign to remove Cantrell from office, has filed a complaint with the U.S. Department of Justice regarding the officers’ participation that day.

While some detractors believe Woodfork is hopelessly behind the eight ball in the fight against crime, the Metropolitan Crime Commission’s Rafael Goyeneche is cautiously optimistic that she has what it takes to succeed.

“The glass is always half full. The future of the city depends on the success of the New Orleans Police Department. This is an opportunity for Woodfork to show her skills and ability to lead the department forward,” he said. “She will have many things to overcome. I’m not talking about her color or being the first female. She will have to show that she can be an effective leader. Woodfork realizes she will have to make her own decisions and lead in her vision.” 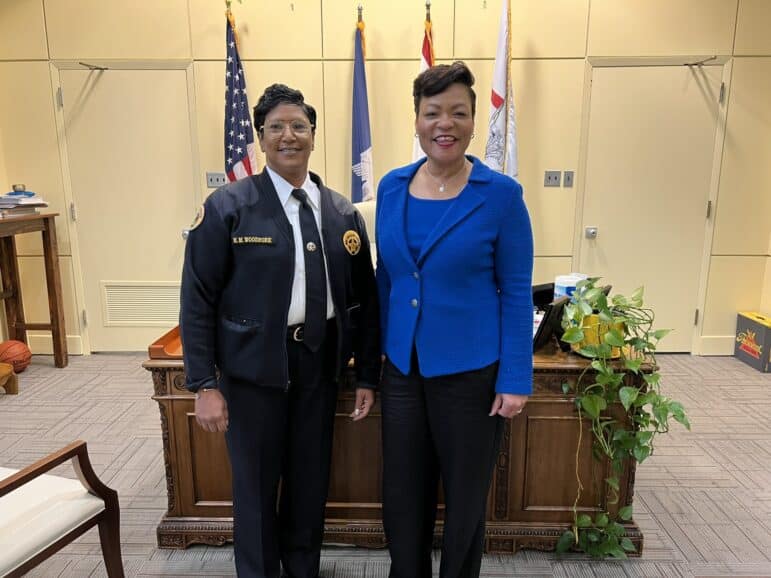 Mayor Cantrell and the City Council have been discussing a national search for a permanent police superintendent. If that occurs, Goyeneche said, the next chief will probably be offered a three- to five-year contract. A superintendent with a contract could be much more independent and work without constantly asking “Mother, may I.”

“The current crime wave is not a byproduct of the Police Department but is due to a lack of political leadership that allowed the number of officers to dwindle,” Goyeneche said. The NOPD has fewer than 900 officers going into 2023, he noted, after losing 150 officers and hiring fewer than 40 during 2022. Yet he is optimistic about the future. “With our historic raises, the NOPD pay package will be among the top two or three in the U.S. next year,” he said, “which should help with recruiting.”

He is pleased that the public has started to engage with the political leadership to ensure that financial resources are properly distributed to the entire criminal justice system — including the courts, the district attorney, judges, Sheriff’s Office and public defenders.

“The citizens are demanding that they be as safe in the city as the mayor and council members, who have their own security. The public recognizes being silent allows our political leadership to ignore their responsibility,” Goyeneche said. “Public safety is the foundation for prosperity. Now that the public has reengaged on the public safety front, citizens are much more knowledgeable. That’s a good sign and a reason for optimism. Politicians are supposed to serve the public.” 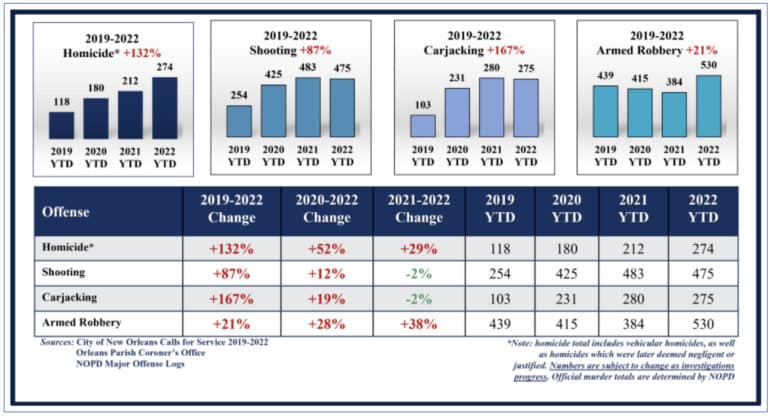 Goyeneche said he is pleased the City Council will require quarterly reporting from agencies it funds. He also praised the NOPD’s Eighth District, which covers the French Quarter and Central Business District, for “leading the pack” on gun enforcement. Since early fall, Eighth District Commander Capt. Hans Ganthier and his officers have been engaged in pro-active policing, which has increased gun arrests of individuals carrying concealed weapons without a license. Many of the offenders picked up on gun charges are wanted for other crimes they are now being prosecuted for.

“The NOPD must begin using all the tools available. Criminals already know not to come to the Eighth District with concealed weapons. There will be consequences.”  As long as violent predators are allowed to prey on law-abiding citizens who are out and about, no citizen or visitor is safe.

Goyeneche believes the NOPD is making progress that the public will begin to recognize. “The NOPD needs to build further trust with the community. The public must become the eyes and ears of the Police Department. It is a multi-step process.” Goyeneche anticipates the public will start seeing results in the first quarter or first six months of 2023.

Goyeneche also blames the political leadership for the continuation of the NOPD federal consent decree.  The consent decree would have ended in the spring of 2021, he said, if the NOPD was properly staffed. By failing to fund and prioritize recruitment of police officers, city leaders inadvertently have contributed to the consent decree’s continuation. The federal judge and monitors will not be swayed to end the consent decree until there is an adequate number of trained NOPD officers.